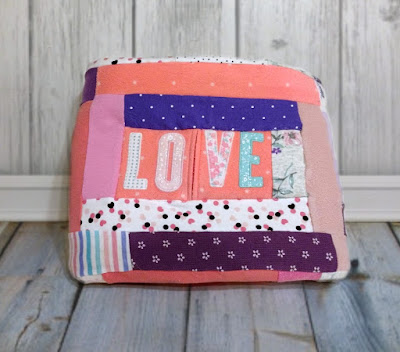 The baby quilt is done!

Once I decided how I wanted it to look, it took far less time than I had expected.

It's a 9 block quilt, I'd call it "log cabin inspired" more than anything, since there's a central motif and the pieces around it are more or less mirroring the idea of a log cabin quilt.

But it's not exactly one, which is about what I'd expect from me.

Because not all the blocks were the same size, and because I wanted to use some of the other pieces of clothing that didn't make it into the blocks, I did strips in between each block and around the edges.  It used up a bit more fabric and added a few more prints to the mix. 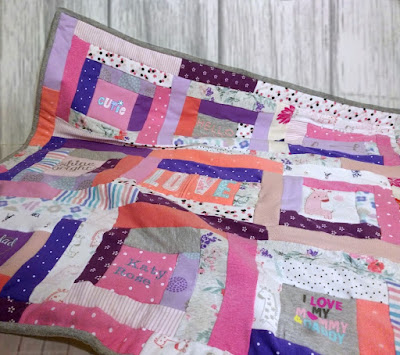 I have to give props to a mom who dresses her child in such nicely coordinating colors.  There were literally only a few pieces I didn't use, and most of them would have still worked.

When I sent her a progress picture and told her I was going to back it in a neutral fabric I had on hand, she was fine with that.  We also decided on a light gray binding, which was from a gray t-shirt I had in my stash for that purpose.

All the years that I thought I didn't need a serger.  I could kick myself, except then I'd have to take my foot off the pedal of my serger.  Because every piece of fabric in this is a knit, this entire quilt was assembled with my serger.

I think my favorite bit is the central LOVE panel.  It was two sides of a jacket with a separating zipper.  I reinforced it before cutting, removed enough of the zipper top and bottom to be able to run it through the machine without hurting anything, and kept it as is.  I could have probably picked out the zipper and sewn the fabric together, but to me that would have changed the point of the piece -- it's meant to be Katy's outgrown baby clothes, and losing the zipper would, to me, lose some of that.

So sweet and inspirational.
I've been saving my son's baby clothes. Don't know if I can muster the nerve to cut into them.

Thanks, Ruthie and Tess. I love making these. And Tess, cutting into them is hard, but at the end of the project, you'll have something new that you can keep, instead of a collection of clothes that you will might eventually look at and feel bad for keeping. You can hand on a blanket, quilt or stuffed animal; your adult child will never want their baby clothes.