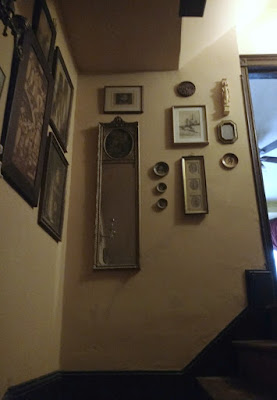 Our housemate moved out a week ago, and I'm still trying to get the house back together.  Any change, whether it takes place in our portion of the house or not, is still unsettling, and she and I had lived here for 17 years.  Before that, we were roommates in my 20s and early 30s, so even though the changes has been a while coming and is the right thing to have happened, it's still difficult to get used to.

We're empty nesters, more or less, and I didn't expect to feel like that.

But on to what I wanted to say, rather than what I haven't quite figured out how to talk about yet.  I had to undecorate the halls so the movers could get furniture out without damaging my stuff, and that's when you realize how much stuff you have.  I took 70 things off the walls, and then had to pull 70 accompanying nails -- because you don't want the movers to get caught on them, of course -- and now I'm patching the holes.

Because what I've decided to do is to not completely redecorate.  We're going to be moving ourselves in the next year or less, and partly I feel like there's no point in putting it back up to have to take it all down again, but the other, more pressing thing is, watching her move was a learning experience for me, and I want to have as much of my excess out of the house before the move as I can.  There's no way I want to move it all to a new house and then realize it doesn't fit. 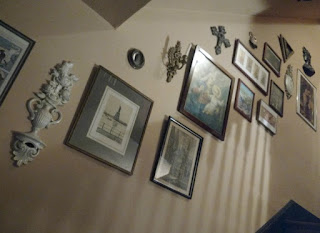 So things are going to go back up on the wall slowly.  With deliberation.  I've gone through all the piles of artwork and odds and ends that were hung and I've chosen all my favorite pieces, the ones I know I'm going to keep.  I'll place those, and then I'll go through the remainder and find some pieces that work with the ones I've rehung.

The rest are going.  Really.  They have to.  There's no way in hell I'm going to have another house with a 3-story, high-ceilinged stair hall to decorate.

If I do, I need my head examined.  Someone please remind me of that fact if I show up here one day talking about my new BIG house. 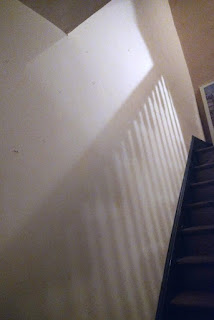 Right now it's both oddly quiet and strangely noisy in the house.  Quiet, because there's no one upstairs, and noisy because without things on the walls to absorb some of the noise, every single sound echoes.

It's like the house is telling me it's time to move on.  I'm listening, really; these things just take time.
Posted by Karen at 3:50 PM 4 comments:

Over on my Facebook business page, I have a weekly Recycle Tuesday feature.  Since most of those are either photos or links to articles elsewhere, I don't generally share them here.  But every once in a while, something is so good that it needs to be spread around.

One of the reasons I got into upcycling was the epiphany one day that I was throwing out more fabric than I was using.  I'd always kept scraps, but never really did much with them until I started my business.  This designer closed his business and then got the scrap epiphany -- in a major way.  Here's a video showing his technique.  Watch this and try to stay away from your sewing machine.  Just try.  I dare you.

I love my neighborhood 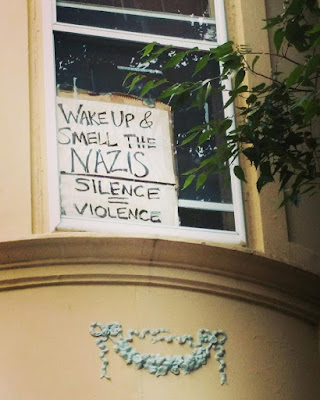 I bought my house in West Philly in spring, 2000, so I've passed the 17 year mark.  During that time, my life changed a lot - and quite a few of those changes were brought about because of the house.

I bought a big house because I looked at my friends buying "starter" homes and thought, I never want to do this again.  I'm not buying a small house so that I can buy a big house later.  So I went big from the beginning, big enough that my oldest friend could rent an entire apartment on my third floor.

In 2005, I met Mario, through a neighbor.  I would have never met either of them if I hadn't bought the house.  He and I got together in 2007, and married in 2011.  Slowly but surely, he moved all his stuff into this house, and it got absorbed with no loss of space.  During this time, I also sewed a lot, bought even more fabric, started a business, bought more fabric for that, and just . . . bought more fabric.

There's also a really good thrift store down the street, and the phenomenon  known as "Penn Christmas," when all the students leave the neighborhood and abandon most of their worldly possessions on the curb.

So, in 17 years, I moved a one bedroom apartment into a 3 story house (with an attic), added 2 more people, a dozen or so cats, and filled the house to the bursting point.

Now our housemate is moving out at the end of the month, and we'll have an empty third floor apartment - which can't be rented to just anybody, because they would literally have to walk through our house.  Trust like that only extends to your oldest friends, who can not only be trusted with your stuff, but with your cats.

This coincides with the City raising property taxes in the last few years.  Taxes have gone from $1300 when I moved in (2000), to $6500.  With no increase in services, street repairs, or anything else that I can see.

So it's time to move.  To a smaller house.  A "starter" house.  With a bit more yard, far less space to cram stuff, and a slightly longer commute to work.  (Not thrilled about that part, since I've lived within walking distance of work since I was 19).  But the nearby burbs are where it's at for us, where we'll be able to find a smaller, less expensive house, with possibly lower taxes (but at least a higher level of service for said taxes).  More yard.  Did I mention I want more yard?

After our housemate departs, I'm going up to the attic and start ruthlessly sorting.  If it stays, it goes into her space, for now  Otherwise, it's getting donated down the street or put on the curb.

I'll start my own Penn Christmas, all by myself.
Posted by Karen at 7:06 PM 6 comments:

The receiving blanket bear / bunny / animal project is still moving along - at this point, it's my best-selling Etsy listing.

There's a lot going on right now, gearing up for show season, and I'll have a lot more to show soon.  For now, I'll just leave you with a selection of some blanket bears, old and new.  Most of them are the classic stripe, but every so often someone surprises me with a totally new blanket and it's a treat to work with. 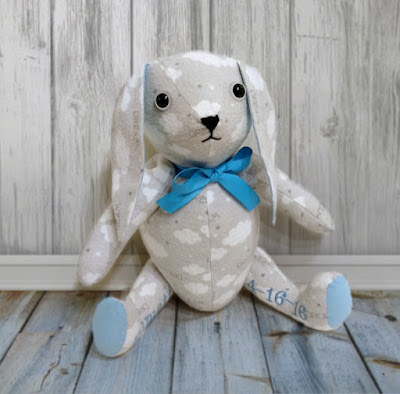 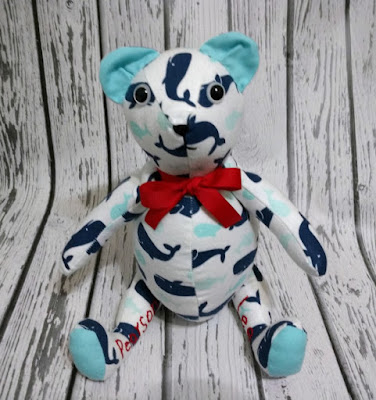 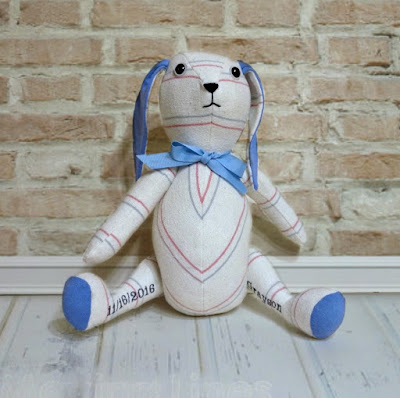 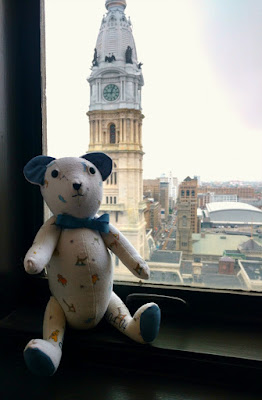 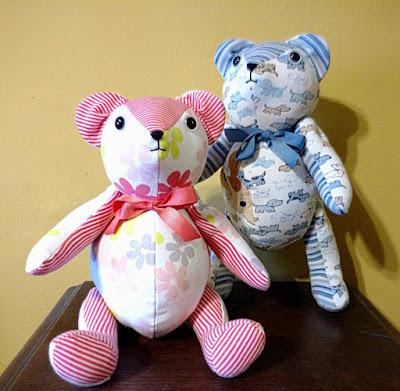 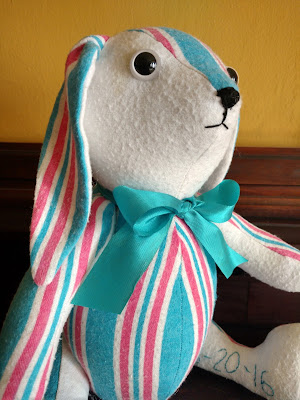 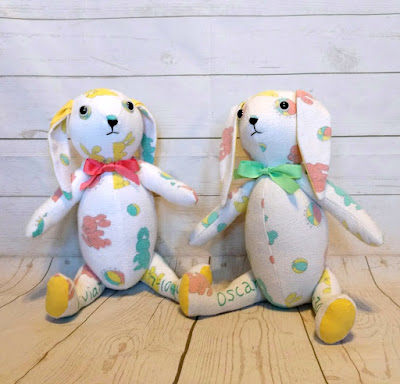 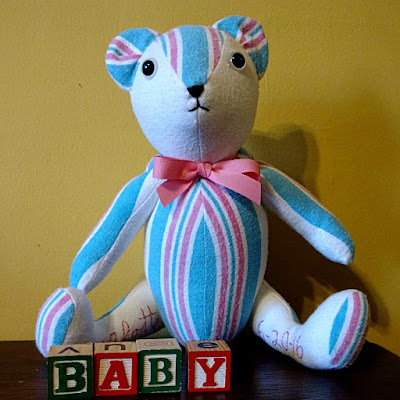 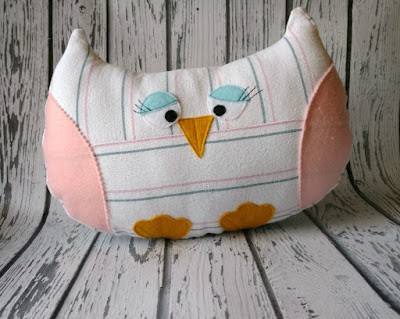 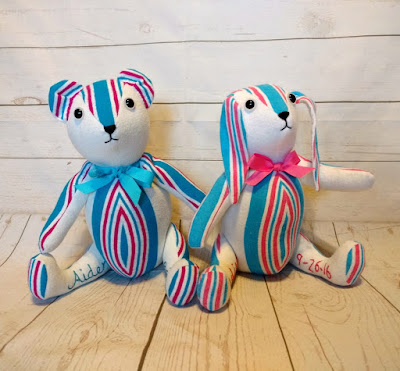 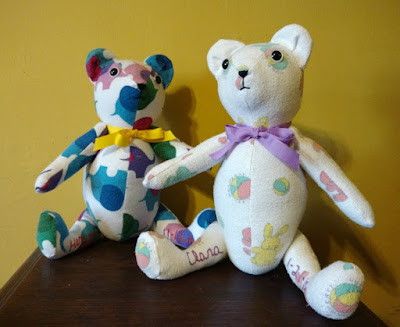