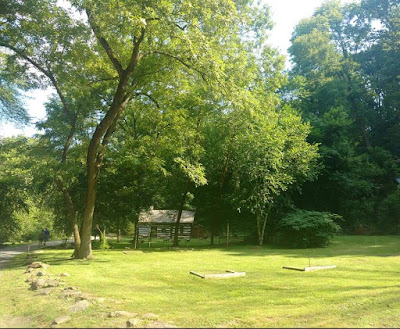 A few weeks ago, we had a hot spell that didn't want to end.  I'm generally pretty accepting of weather; it can get unpleasant, but it's going to end sooner or later, and then we'll have something different to complain about (like the biblical rains we've had recently).

But this heat wave was a bit more than I was up for.  The worst thing was it was trapping me in the house under a fan, and since it's summer, I want to explore my new surroundings.

One morning, I got out around 8:30, right after Mario left for work, and headed west from our house.  We'd already walked north a ways, and south and east led to areas covered by our drive back to Philly each day. 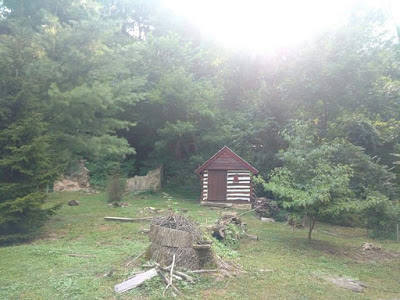 A few blocks from the house, I saw a little sign that said "swedish cabin."  I'd seen that sign before, on the main road we used to get to Philly or further west.  No idea what it was, though.

I followed the arrow on the sign to the next sign, and the next.  Eventually, I came to a sign that said "swedish cabin, 3/4 mile" with one last arrow.  This took me up a quiet, paved road along Darby Creek.

There were mid-week fishermen along the banks, but no other traffic.  I walked for about a half hour (longer than it would normally take, but it was already in the 80s), and eventually, the trees on either side gave way to a clearing. 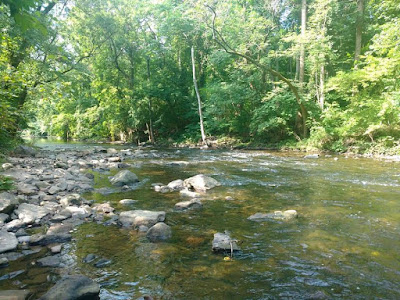 The cabin, according to the little historic marker out front, was built between 1630 and 1650, which makes it the oldest surviving building in Pennsylvania. It was originally intended as a trading post for Swedish settlers and Native Americans, and after that it had a fairly checkered history.

By the 1970s, it had fallen into disrepair and was heavily vandalized.  A "friends of" group formed, had it designated historic and began restoration.  Now it's open on Sunday afternoons for a few hours for tours, but otherwise, it's just this lovely quiet spot at the end of a quiet road.  With water. 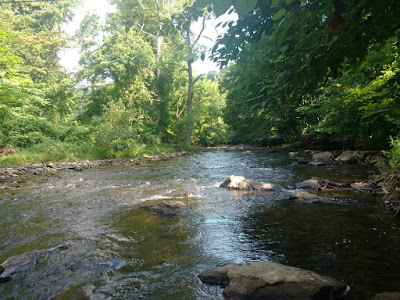 I'm a sucker for water.  If I'm hot, the only thing that really makes me feel better, is finding running water to splash around in - or at least put my feet in.

I found a bank that wasn't too muddy, took off my shoes, and did just that.  It was cold, fast-moving, and the feel of the water moving over my feet took my body temperature down a good 20 degrees.

I sat there for a while, until I heard voices on the path, and a few joggers arrived with the same idea.  We nodded and said hello, and after a few minutes I got up, shook myself dry, and started back toward home, in a totally different frame of mind. 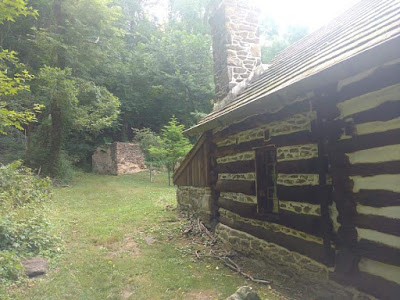 I'm not a big fan of exercise for its own sake.  I'll run, if I'm being chased, but as a recreational activity, it's overrated in m book.  At some point, I'll get my bike put together and have that option, but for now, I'm on foot.

It's just been lovely finding so many quiet, green places close to home that make me feel like we've moved much further from the city than we have.

The best part of this little morning wander away from home was the clearing effect it had on my head.  I'd been puzzling away on how I wanted to start on a project (the happy family of critters I wrote about recently), and when I got in from my walk, I went right to the machine and started work and it all made sense. 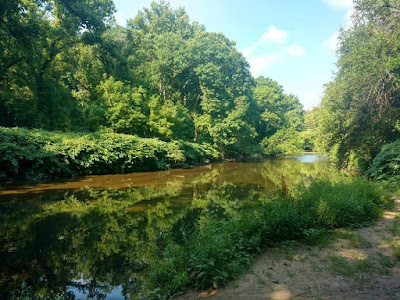 A few days later, it got a bit cooler and I got Mario to walk out there with me on the weekend.  I found a more direct route than the follow-the-signs route I took the first time, and the whole walk (about 1.5 miles) took a little over a half hour.

Coming back, we took a slight variation that I had noticed on my walk, but not taken.  I already wanted to get back to my sewing machine, and I was afraid that another side trip would distract me - and it would have.  Turns out there's a whole recreation area down there by the creek, with areas for cookouts, a swimming hole, a water fall, and - most fun for me to watch - ropes for adventurous swimmers (all adolescent boys) to swing out over the water.

This path took us out to a dog park near the main road, and when we got there, we realized we passed that park nearly every time we drove west, without knowing any of it was back there. 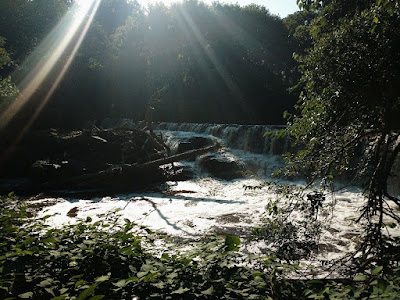 Driving can be nice if you know where you're going, but if you're trying to explore a new place, there's nothing better than getting lost on foot, and finding out for yourself what's close to home.

I love walking. You see and find so much.