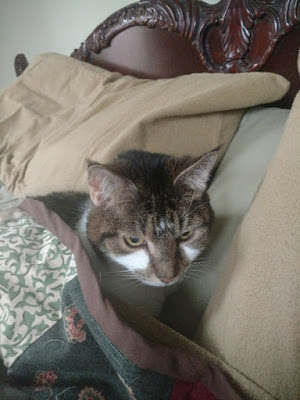 We're holding at four cats at the moment, but I have an update on Annie.  You might remember that she's had surgery twice in the past to remove tumors under her right front arm.  The last one was two years ago Thanksgiving, and she had such a bad reaction to the anesthesia that time that I decided then I wouldn't put her through it again.  (She came out of it in a full panic, and paced and cried nonstop for over 24 hours, and she still wakes up anxious and disoriented more than two years later).

She's seventeen now, and that only adds to the risk.

About a year ago, one year out from surgery, I noticed a tiny bump under her arm.  Tiny, smaller than a lentil.  I decided to stick with my resolve and just keep an eye on it.

Flash forward a year, and it's conservatively about the size of a Cadbury chocolate Easter egg, on her chest and under her arm on the right side.  Like the two previous tumors (which were still tiny when removed), it seems to be encapsulated - it's completely smooth and there are no other lumps, bumps or irregularities anywhere on her.

Now that I'm faced with the realization that this is going to kill her sooner rather than later, I'm regretting my decision not to treat it.  But then I second-guess my second-guessing, and have to admit that I've got a living cat who doesn't realize yet that there's anything wrong, and that the surgery might have done more harm than good and I might have lost her sooner.

So we're in a holding pattern until she tells me she doesn't feel right.  At the moment, she's still eating and drinking normally, her fur is still shiny and not falling out, and it doesn't impede her movement at all - she still jumps on and off the bed and chases Katie like a kitten.  She sleeps more than she used to, but she's also seventeen. What does that make her in cat years, 85? I'd be sleeping more, too.

I've done this before, and I'll do it again.  Annie will let me know when to do it.
Posted by Karen at 4:16 PM

Enjoy her while you have her. You are doing the right thing.

I feel your pain. We recently went through hospice with a 17 year. He did not seem to be in pain, but was not active and became incontinent. A vet I spoke with told me that that is how cats deal with pain. I was glad we did not wait any longer than we did. You are doing your best. All will be well.

Oh please don't second guess yourself. You have given her love and care for 17 years! How blessed you both have been to enjoy such a long pet/human relationship. You will do the right thing at the right time. Bless you for loving her so.

It's always such a difficult time. 17 years is a pretty extraordinary age for a cat - Annie is lucky to have had such a caring owner all these years.