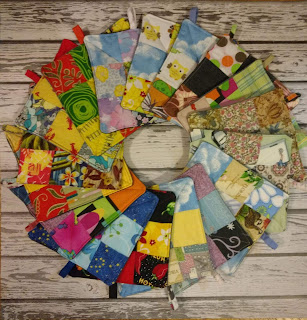 As I start to excavate my workroom post-holiday, one of the first things I do is clean up the scraps that have fallen everywhere.  By the end of the season, it feels like I'm just throwing stuff over my shoulder to be dealt with in January.

The general rule of scrap is that sweater bits, if they're too small to use, get shredded up and used for stuffing.  The cotton scraps get saved for doll clothes, if they're big enough.  If they're not, they go into the potholder stash.  If there's enough fabric left that I can get a 3" square from it, then it's not trash yet.  After that, well, if it's 100% cotton, it goes into the compost.

Most of these will get put away for show season.  A few specific sets - cats and dogs, and a three pack of chickens - were intended for Etsy, but a friend already purchased the chickens.

I've been asked why I bother to make potholders.  They sell well during the holiday season, but aren't much of a moneymaker, since people generally don't want to pay much for something that they'll either burn or get filthy in the kitchen.  But they are a nice add-on purchase, and it alleviates my guilt that I don't use up every piece of cloth that enters my hands.