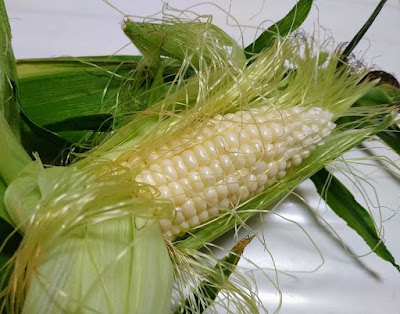 I planted some new crops this year, alongside the standby crops of tomatoes, peppers, cucumbers, and potatoes.

Watermelon (not ready yet), corn (more than ready), and lima beans.

I grew up on canned lima beans and thought they were one of the world's nastiest vegetables, and then a few years ago, we got a small bag of fresh limas at the farmer's market.

Those were a whole different vegetable.

I put in 4 small starter plants in May, and they've now covered their trellis to the point where I have to climb inside it to pick beans. But it's worth it. 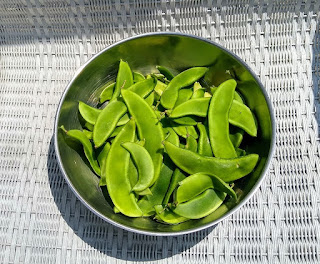 Also, I now know why they're so stinking expensive at the farmer's market - there are only 2-3 beans per pod, so it takes a lot of picking and shelling to get enough for a side for 2 people.

As an illustration, the bean photos here - it took 3 bowls of pods to get that single bowl of beans for dinner.

But again, worth it.

And fresh corn, picked right before dinner, is a revelation. Since it's been really hot, I haven't wanted to heat up the kitchen with cooking, but I've found out you can quickly steam corn in the Instant Pot. Also the lima beans. Also the stuffed peppers I made the other night. Instant Pot, where have you been all my life? 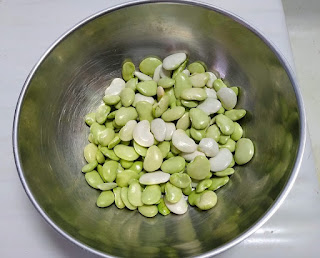 Here it is, the official banner for my upcoming novel. This is now my header on Twitter, and on my new author Facebook page.

I would be thrilled to death if you followed me there -- not much happening yet, but that's where I'll be doing a lot of the promotional fun stuff for the book before and when it comes out, including readings, giveaways, and who knows what else. 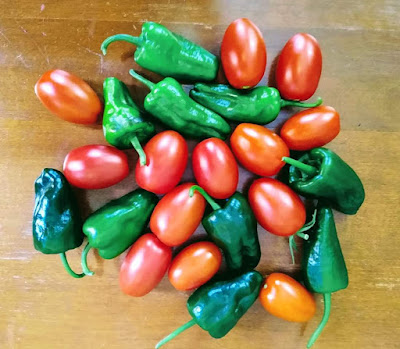 The garden is coming along well.

We've alternated biblical rain storms with 90 degree weather, and the vegetables, especially the tomatoes and peppers, really seem to appreciate it.

This is today's harvest. The tomatoes are Juliets, smaller than plum tomatoes, which don't work well here - they tend to get blossom end rot, and I've just given up on them. The darker green peppers are chipotle, and the lighter green are Padron, a Spanish variety we loved in Barcelona and which I grow evert year. 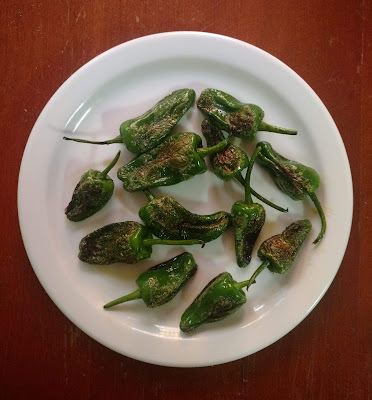 This is what happens to them.

It's a very simple preparation, they just get blistered in hot olive oil, sprinkled with sea salt, thrown on a plate very briefly and then swallowed whole.

O what a beautiful morning 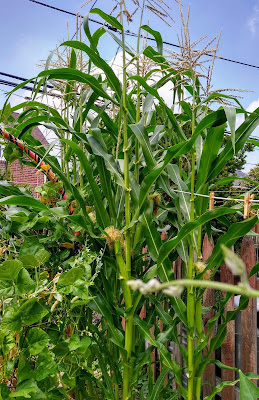 How high is an elephant's eye, anyway?

I'm not sure if we're there yet, but it's coming close. The corn is anywhere from six to eight feet tall, two ears on each stalk, and they feel like they're developing nicely.

It's kind of hard to tell how they're doing, since I've never grown corn before, but they aren't quite full-sized and they don't feel quite as thick as they should, so I think they'll be ready to eat in another week, maybe two.

Corn is something new for me to grow, and I wasn't sure how much I would enjoy it, but even without getting something to eat at the end, this has been fun to watch develop. I'll definitely grow it again next year.
Posted by Karen at 10:16 AM 4 comments: 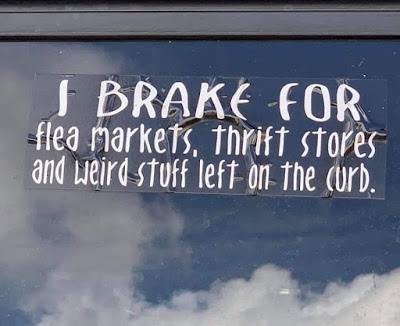 First off, I want to thank everyone who left a comment on my last post. I'm not sure which, if any, will end up being used, but they are all food for thought.

I saw this sign on Facebook the other day and had to share it. I don't think I've ever felt so seen in my life. This is definitely me. Especially the weird stuff on the curb bit. Far too many treasured possessions started out as weird things left on the curb.

What about you? I know I'm not the only trash picker out there. 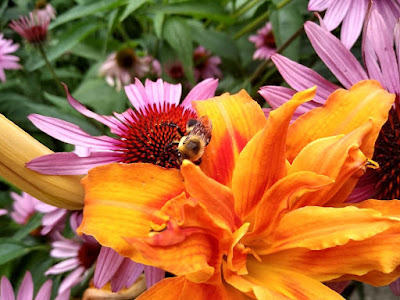 I'm looking for some input here. I'm moving along pretty quickly on my Depression-era story. The first draft is basically done, but now is the fun part, where I can start refining the voices of my two main characters.

The book is told from two different points of view: Ava, the slightly older sister, who stayed in the coal town and got married, and her sister, Clare, who married well and moved to Philadelphia.

They've lost their mother, and one of the things they do (separately and together) is remember her words of wisdom. Lillie's advice - good, bad, quirky, or otherwise - is scattered throughout the book.

Ava shook her head. "This is fine." She sat down heavily on one of the beds. "How did you manage this? You've been with us all week, helping with the move."
Clare leaned against her shoulder. The baby sat solidly on her lap, reaching up to play with her hair. "I sent Harry home with a list, and Katie and her parents put it together. There are some clothes in the drawers for each of you. I had to guess at the sizes."
"Oh God." Ava clapped her hands over her face and bent double. "What's happened to my life?" Her voice was muffled, but Clare didn't think she was crying.
"It's like Mama said," Clare told her. "Sometimes you just have to relax and trust that the Lord knows what he's doing."
Ava brought her hands down. "God doesn't give you more than you can handle," she quoted in return, "unless he wants to know what you're made of."
The sisters stared at each other for a moment before dissolving into laughter.

Did your mother (or grandmother) have any sayings they repeated that you still find comfort in? They don't have to be religious (though my characters' mother was).

I asked on Facebook and got an interesting collection, some of which I can probably use, and some of which would shock all my characters (apparently my mother wasn't the only salty one in the bunch). If you have anything to add to the conversation, I'd love to hear it.
Posted by Karen at 2:45 PM 11 comments: