Not all sewing, either 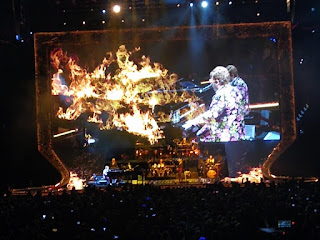 Around this time last year, a pre-Christmas ad came out featuring Elton John and some clips from the biopic. I watched it at the office (I was working hard) and aside from getting teary - it's one of those commercials - it struck me that I'd never seen Elton John live.

BTW, before you read further, watch the ad. It's worth it. I'll wait.

I'd come close to seeing him in concert with Billy Joel when they were touring together, but my boyfriend at the time (who had access to tickets to almost anything) passed them by because he didn't think I'd want to go. I did say 'boyfriend at the time', right? Yeah, that's the kind of thing you ASK about. 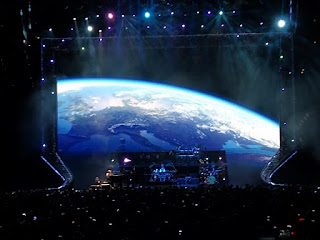 So I looked to see if/when Elton would be playing Philly, and it turned out the farewell tour wasn't coming until this November. In a leap of faith that we'd all still be here, I bought tickets 13 months in advance, and we went to the concert Friday night.

It was everything I'd hoped for, and more. Some artists can play live and sound like their records. Some, like when we went to the reunion concert for the Police a few years back, sound like 3 talented musicians on the same stage, playing the same music, but alone. (You could really tell they didn't want to be there). 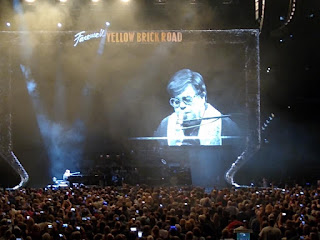 Elton John's music doesn't sound the same live, because the man - and his band, many of whom have been with him for his 50 years of touring - have so damn much enthusiasm that they just take a song and run with it, adding a lot more instrumental bits and having, apparently, the time of their freaking lives. 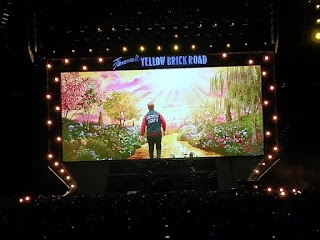 The show ran for a solid 3 hours, with only a 2 minute stage darkness (which still had audio and lights) while he changed his clothes from a fabulous beaded jacket to an equally-fabulous floral print with hot pink pants.

At the end, the stage went dark and the musicians disappeared, but they came back out for an encore, with Elton in yet another outfit (a long robe), that he took off at the very end to reveal a track suit, which he wore as he stepped into the backdrop and walked off down the Yellow Brick Road.

That sounds amazing! Quite a few years ago, he came through Canada and my boss at work went to see him. He thought the show was wonderful and that Elton John was a great showman, entertainer and singer. He gives his all during a performance. Glad to hear that you got to finally go.
Barb

I have seen Elton live. Many years ago. And it was one of my favorite concerts. I was happy to hear he is still a great performer. It sounds like it was a fabulous show. I had a similar experience to yours with the Police, but mine was with the group Heart.