At the turn of the year 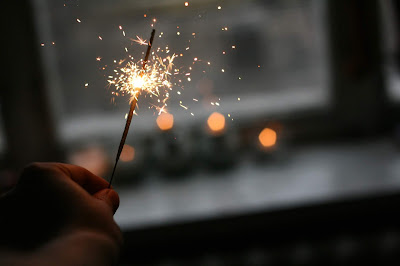 Even if you don't do resolutions - and I try not to, because they just ask to be broken - it's hard to see the turning of the year as anything but a time to look back and assess, and to look forward and make a few plans for the future.

2019 was a big year. An exhausting year. An exhilarating year. A year when I tried to stop watching as much news so I could listen to the people in my head (the people on the news aren't going anywhere, there's plenty of time for them). A year of realizing that getting out of my own way is the best thing I can do for myself.

I signed a publishing contract in 2019, after years of wanting to be published. I turned 55. Mario and I celebrated our 8th wedding anniversary. We went to Venice. We worked on our house. I did edits to my first novel, and started a second (and a third). I still did craft shows, though my heart wasn't in it as much this year. My book came out, and I did a Facebook live reading, what feels like far too much promo for my extroverted-introvert self, and I'm making plans for next year.

In 2020, I'm going to continue promoting Songbird, because publishing has changed and authors have to be a lot more involved. I'm going to keep working on my second Tudor novel, tentatively titled A Wider World. I would like to finish the first draft by the end of January, and at this point, it's looking entirely possible. (A first draft is far from a finished novel, but I'll have told myself the story at that point, so turning it into a story for someone else to read is a whole different animal). Once that draft is finished and resting for a bit, I'll go back to working on the Great Depression book that I had started before the characters from A Wider World started talking to me. That one's on draft 2, so closer to completion.

If AWW is as good as I hope, and my publisher likes the idea, I'll sign another contract and maybe have another book out in 2020.

Also, I've got a birthday soon, an anniversary sooner, and my first bookstore event even before that (January 13th!). Mario and I have just made plans to go to Edinburgh in the early spring, which was totally unexpected, but we found an airfare we couldn't pass up, and that's always the biggest expense in travel. I'll have to look around Edinburgh with a writer's eye, not just a tourist's, because it was a happening place in the 16th century, and I'd like to find a way to use it in the future.

At some point I would like to address the fact that I've become a slightly larger person than I was this time last year, but I'm hoping that once the weather warms up and I can work in the garden and get out and walk more, that problem will solve itself.

I also want to do more in my town - there are a lot of volunteer opportunities, and I've gotten involved with some, but our village takes a village, and I'd like to devote more time to it.

What about you? Any resolutions? Plans for the new year? What are you excited for in 2020?
Posted by Karen at 11:32 AM

Karen, I am so happy for you at what 2019 has meant and wish you the best '20s. I am a long time blog reader and lurker and you are an inspiration to me in every way possible.

You've had an amazing year, Karen. Well deserved! I have no resolutions except to try to incorporate more exercise and healthy eating into my life. I've always been inclined toward this, but since I turned 60 this year, it seems even more important. Happy new year!

I'm excited for you Karen and have enjoyed following along on your journey as a blog reader. I bought your book but as a tired teacher couldn't get into it in the crazy of November report cards and then December. I'm hoping to work on reading it (avoiding the getting sucked in to 2am moment as well ; ) before my school break is up. Here's my 2020 thoughts
My hubby and I are just back from a trip and are thinking warm for our next one. I bought fabric from where I was (Montreal - so fun) and hope to sew it up and prioritize that as I start semester two. I too am bigger than I was and would like to become more active and do something about that - particularly since I have bathing suit sewing and wearing on the horizon. I'd like to feel less tired and need to think about my "extra curricular" commitments and how close they are (or far they are) from how I want to spend my time.
And read more ; )

All the best to you and yours.