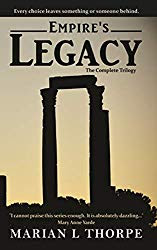 A while back, I asked if you'd all be interested in the occasional book review on the site, and happily, some of you said yes.

My first review is actually for a trilogy, though I read Empire's Legacy as individual books before the author put them out in a single volume. I also swallowed them in a three-day weekend, so that tells you something about them before I even get into the story.

The books are a re-imagining of early European history - the author calls them historical fantasy. I prefer alternate history, because "fantasy" to me means that there might be elements of magic in the store. The only element of magic here is just how good a storyteller Marian Thorpe is.

The first volume is Empire's Daughter. Here's the blurb:
For twenty generations, the men and women of The Empire have lived separately, the women farming and fishing, the men fighting wars. But in the spring of Lena’s seventeenth year, an officer rides into her village with an unprecedented request. The Empire is threatened by invasion, and to defend it successfully, women will need to fight. When the village votes in favor, Lena and her partner Maya are torn apart. Maya chooses exile rather than battle, Lena chooses to fight. As Lena learns the skills of warfare and leadership, she discovers that choices have consequences that cannot be foreseen, and that her role in her country’s future is greater than she could have dreamed.

This gives you the bare bones of the story, but Lena's journey is totally engrossing, from her start as a village fisherwoman to her role as a trained soldier of the Empire. I enjoyed the well-developed, credible division of worlds - boys are taken away for military training at the age of seven, while women stay in their villages and do everything else. Men visit twice a year for arranged festivals, sometimes to rekindle established relationships, and sometimes to just keep the population going. It's a system that works for everyone, until the Empire comes under a threat too large to be handled by the men alone.

Book two, Empire's Hostage: The Empire and the northern people have been at war for over a year, but a truce is finally at hand. As part of this treaty, Lena, now a Guardswoman on the Wall, is asked to stand as hostage, to go north to live and learn among the people of Linrathe. But not everyone there will welcome her.

One thing I particularly like about this author is how deftly she handles military and political intrigue. In some books it can get heavy, but here, the plot moves as quickly as an action film, even while you're delving into the necessary histories of the different nations involved in the war and the treaty. Lena continues to be a fascinating protagonist, with identifiable emotions and thoughts not ancient or modern, but wholly appropriate to her created world.

Finally, book three, Empire's Exile: Exiled from the Empire as a traitor, Lena travels into long-unknown lands, determined to find Casil, the legendary city of beauty and learning in the East. Her experiences in the first winter leave her scarred and afraid, but, resolving to heal, and supported by an unexpected love, she continues her search. A chance meeting with envoys from the Empire and Linrathe, desperately seeking help from Casil, forces her to a difficult decision. Struggling to keep faith with her choices, facing the almost-certain destruction of her land and her people, Lena’s journey takes her to a deeper understanding of loyalty, sacrifice, and the dimensions of love.

Best book book of the series - until the next one comes along. Lena's relationship (not going to spoiler, but it's GOOD!) and her interaction with the other characters gives you a broad picture of the world the author has developed over three books, the cost of war, the choices people make when given no choice, and the resilience of the human heart. Bonus points for making me cry.

All three books (or the trilogy) are available on Kindle Unlimited. You can find out more about the author on her website.
Posted by Karen at 2:16 PM

Interesting! And I just finished a book at 1:00 last night/this morning, too late to take time to select another. Now you've done the work for me! This is a little out of my usual genre, but it sounds like an interesting change of pace.

Thanks for the review.