Book Review: The War in Our Hearts 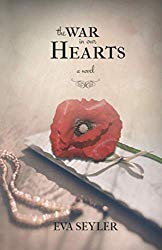 Time for another random book review, this one from Eva Seyler, my publisher's other historical fiction author.

I read The War in Our Hearts, which came out around this time last year, before I became friends with Eva on Twitter. I was interested first because we shared a publisher, but also because I've always had a soft spot for WWI stories.

The description from Amazon: France, 1916: Estelle Graham faces a nightmare. Expecting to meet her beloved husband and bring their newly adopted daughter home to Scotland, she instead finds him gravely injured and unconscious in a casualty station. As she fights for his care, she takes solace in his journals and letters.

In a farmhouse in Somme, Captain Jamie Graham is forever changed when he meets young Aveline Perrault. Both of them broken and walled off from the cruel and cold world around them--made even crueler and colder by the Great War--the pair form an unlikely bond. She finds in him the father she never had, and with her love, he faces the pain from his own childhood.

Discover the depth of love and faith in the face of brutality and neglect as they learn to live while surviving World War I.

This is not your standard WWI story. While it certainly covers the horrors of war, much more of it is made up of the actions that brought the protagonist, Jamie Graham, to this point - his awful childhood, his years at school, finding his love of music. His meeting and courtship of Estelle. And, finally, his fellow soldiers - and Aveline - who he encounters in France prior to his injury.

Unusually told in flashbacks, diary entries, letters and memories, this is a mosaic of a tale that will stay with you long after you've finished.
Posted by Karen at 11:54 AM