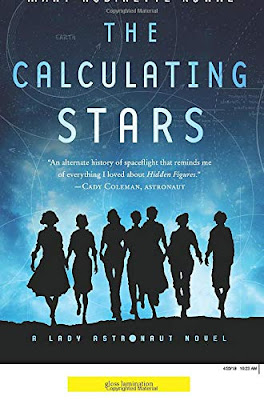 I'm going to preface this review by saying I'm not a big fan of science fiction. Never have been. No Star Wars, Star Trek, or Battlestar anything of that ilk for me.

Which doesn't mean I haven't seen a fair bit of it, but...still. Not my thing, especially in books.

These books, however, are my thing, and let me tell you why. They're not really sci-fi in the way I think of sci-fi, even though there's plenty of space in them.

They're alternate history, which makes them entirely my thing. An asteroid hits Earth, destroying a large chunk of the east coast and pretty much anything that counted as government. Scientists (who are listened to almost as well in these books as they are in real life) warn that Earth will become uninhabitable sooner rather than later, so what's left of government starts to push forward with a space program that hadn't gotten off the ground pre-asteroid.

The main character is a Jewish female computer (think the women in Hidden Figures) who wants to be an astronaut. Her husband is also involved in the space program, which doesn't make her desire any easier - if she gets in, is it because of him? Because of her own skills? And how many more deserving candidates are there, who are also being ignored because (a) it's still the 1950s and they might be (b) black, (c) Asian, (d) some other minority, and definitely (e) female. 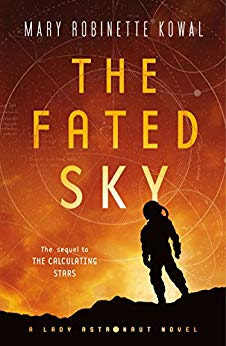 There are a lot of historic figures on the periphery, and a lot of commentary about life then that really reflects on our lives now. The author, Mary Robinette Kowal, is one of my favorite writing podcasters - you can check out her show Writing Excuses if you're so inclined.

The books in the series are The Calculating Stars, The Fated Sky, and a novella, The Lady Astronaut of Mars, which should be read after you've read the earlier ones. (It's a standalone, but it's more touching once you get to know the characters. There's also a third book, The Relentless Moon, up for pre-order. I don't usually pre-order. I don't usually read sci-fi. I pre-ordered.

Have you read any of these? What do you think?
Posted by Karen at 4:46 PM