It's not mother's day 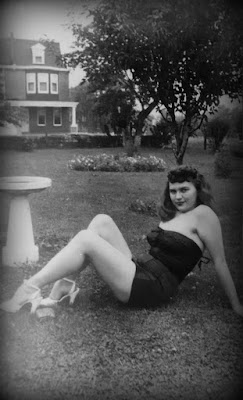 But I've been thinking about my mom lately.

Someone on Facebook started it. She posted a photo of her mom with something sentimental - which is fine, don't get me wrong, sentimental is good - but it's not something I've ever applied to thoughts of my mom.

As you can tell from this photo, she was...interesting. This was at age 17-18, only a year or two out of her ugly duckling phase (really, she did have one!) and a few months before her first marriage. Which she did because she was bored.

I've been dining out on Mom stories forever, and people always ask when I'm going to write about her. Memoir? Fiction? She's always been stranger than fiction, the kind of character that, if you create, people would say was impossible.

She was impossible. She also raised me, loved me to distraction - partly, I think, because she never wanted kids and if she was going to have one, she would love that child so hard she wouldn't remember what she'd given up for it - and embarrassed me for several decades running.

All that said, she was an original, and I wouldn't be the person I am today (or the storyteller, for that matter), without having had her in my life as inspiration, mortification, and she-who-I-would-not-become.

Honestly, is there anything more judgmental than a teenage girl? Especially if there's something legitimate to be judged? I don't think so. Somehow we got through it, and her phase of "I'm not your mom, I'm your best friend," and by the time she died in 2006, we were mostly friends, and only irritated the crap out of each other on a regular basis.

But look at that picture. Look closely. And then imagine yourself as a teenager, with a mom who, at 40, still pretty much resembled that photo (but blonde!) and dressed like that photo. Thus, my mortification. When your pre-adolescent crushes give you Valentines to give to your mom, she's doing something wrong. Or in her eyes, something right. Male attention, even of the 12-year-old variety, was a good thing.

I can't write about her yet. I can't be totally objective, and honestly, I don't know if I'm a good enough writer yet to do her justice.
Posted by Karen at 12:54 PM

Oh my, and I thought mine was something. I can totally relate to a mom that does not come even close to being 'normal. Or at least what my teenage brain thought was normal. Also, try filling in the blanks for a government security clearance when one of the first questions is to list schools attended. I ran out of space fast trying to list 12 grade schools, not to mention middle and high schools. We were always running from something. Way too many addresses. Takes a while to figure how you fit. Karen in Illinois.

They're all some version of something, aren't they? I had multiple schools, too - only 2 grade schools, but 5 addresses. One junior high school, which was miserable and I would have been happy to change. One high school - the only thing I approved of about her third husband was that his house was in a different school district than my junior high.

Karen, I'm just reading a book called "The Bolter." I highly recommend it. A true story about a woman who left behind the social mores of her generation. She was born in 1900 and lived until 1941. I think you would find it interesting.

Somehow, most of us grow up as good parents, good citizens of the world, and not as “needy” as one would think. I’m always amazed.

I have been reading your blog for at least 10 years. I started for the sewing, but stayed because of the writing! I LOVE your writing style. When ever you wrote about you, your mother, or your aunt I knew it would be a good read. I hope some day you can come up with a fictional version of your relatives. And I still enjoy your blog writing. Renita in NC