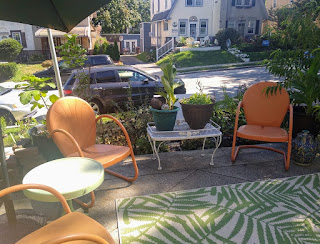 Somehow it's nearly October. I know that time has no meaning anymore, but this is getting ridiculous.

I just finished my Readers Group newsletter, with a few changes. I'd been sending it out twice a month, but I've realized that I spend far too much time trying to think of interesting things to put in the newsletter, rather than thinking of interesting things to put in my books. Which is the reason - I hope - that people have signed up for the newsletter. So it's going to once a month after this, unless there's a special announcement, a sale, etc.

So I have been doing a fair bit of writing, other issues aside. My third book, Lady, in Waiting, is still in the first draft but has passed the 100k word mark. The eventual publication length will probably be about 115k (that's what Songbird and A Wider World came in near), but I'll probably hit 130k and then edit it back down. I know how I work by now.

A good bit of my writing has taken place outside. I've trained myself to dictate my rough first drafts, which I then upload onto my desktop and tidy up, speech-to-text not always being the most accurate technology. Still, it's better than sitting inside when we're at that perfect end-of-summer-almost-fall weather.

If I'm not walking around the neighborhood, I'm sitting on our front patio, which has just recently been redone with four orange vintage chairs and matching tables that I trash picked from a neighbor across the street. They'd been in his garage for 10 years, and he finally gave up on the idea of repainting them and using them on his own porch. Personally, I like the orange, so I got a gallon of metal paint in the same shade and I'll sand and repaint once the season is over.

Garden season is nearly over. We've had a few nights in the 40s, and that means the bigger tomatoes have shut down, along with some of the peppers. The grape tomatoes are still chugging along, producing more fruit than I can use, and my neighbors are beginning to hide when they see me coming, in case of tomatoes. I made a roasted tomato salsa last week which came out well, so I think I'll make a few more jars to shove in the back of the fridge.

What about you? Is it still garden season? Are you making anything with your produce, whether it's from your garden, the farmer's market or the grocery store?

One of these days I will get to read your books. It has been a strange year in more ways than one. Covid, cold, wet summer, slugs in the garden. I have lost almost half of my tomatoes, all my beans and beets. Family drama, which I am sure is due to the Covid lockdowns, cancelation of our once in a lifetime European holiday, and most other plans for that matter. The only thing that has worked out is the garlic crop and the fact that our longarm business has flourished due to the fact everyone has been home sewing.
Barb Barna

My garden season literally got smashed by the derecho in August. Well a few things survived but I'm going to yank all that's left this week due to expected cold. I'm taking the view that at least I didn't have to worry about putting up garden produce AND clean up downed trees at the same time. Not like canning jars are available anyway.

I like your chairs! Sometimes a shot of color is better done with garden furniture than depending on flowers. I should find mine and repaint them. I have NO clue why DS and DH decided to paint the yellow chair red, and the red chair yellow, and a 3rd one blue (a color it was not prior). Now the paint is peeling on all and they look like h....