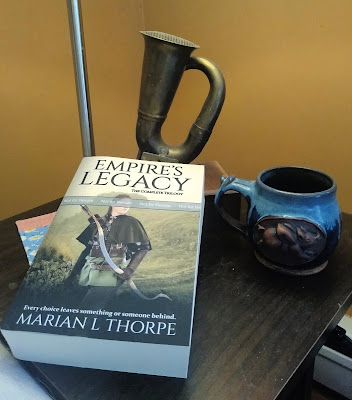 Even though I'm supposed to be writing, I still read. A lot.

My public school education was decent, but it wasn't what taught me to write. Reading did that.

One of the best things about becoming a published author is becoming friends with other writers on social media (and eventually outside of social media, once we can travel again).

I've read Marian L Thorpe's Empire's Legacy trilogy before - in its separate volumes - but because she recently commissioned a new cover for the combined trilogy, I was lucky enough to receive her author copy (she lives in Canada and Amazon has issues, and the post office has issues, and it was just easier for me to review it for her). But that means I know have a whomping big paperback trilogy that she'll soon be giving away to US readers on her mailing list. Which you can join here.

Amazon files these books under alternate history / historical fantasy. It's a hard genre to pin down, because to most people, "fantasy" means elves and magic systems, but in this case, it's a variation on post-Roman Britain, with different names, a slightly altered map, and a thoroughly reimagined history, including a society (logically) divided by gender. The history is so well done that I feel like I'm reading about a time period I've just never explored - it doesn't feel "fantasy" in the slightest. Which makes sense - one of her reviewers actually calls it "Fantasy for people who don't read fantasy."