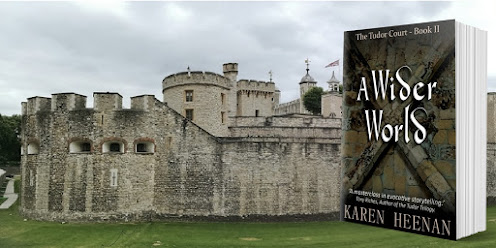 Another snippet from A Wider World, because today is the 485th anniversary of Anne Boleyn's execution.

“I thought I’d get some work done.” I hadn’t intended to witness the executions; I lost my taste for such matters as a boy, when I saw the Duke of Buckingham’s trip to the block.

I took his meaning. Of course, they were going. Cromwell had worked tirelessly toward this for months. He would be in front, in his rightful place in the proceedings. My absence would be noted.

“I’ll be right there.” Part of my hesitation was a strange sympathy for Smeaton. He’d gotten his start in Wolsey’s choir, transferring to the Chapel Royal on the cardinal’s fall from grace. From there, he found the queen’s favor and moved to her household, where, by looks, talent, and breathtaking stupidity, he encompassed his own end.

I hadn’t spoken up for him, of course. What I said to Tom was true—Mark was already dead, and I had no desire to join him in that subterranean chamber with the maiden and the rack and the thumbscrews. Being one of Cromwell’s men would not save me.

The five men who died that day were guilty, though not of the charges brought against them. They were guilty of the crime of getting in the way of Thomas Cromwell.

I was torn. I liked Cromwell. He was a man like myself, or Cardinal Wolsey: born low, and achieving greatness by sheer, stubborn hard work. He was arrogant, and rearranged facts to suit his intentions, but I would not condemn a man for my own faults.

“All of them married men,” Ned said hoarsely. “With children.”

“The king will not punish them for their father’s misdeeds.” I was almost certain of that, for Cromwell had worked with Wolsey, and had only risen after his master’s death. If one was useful, King Henry looked away.

Smeaton died last, after the gentlemen, and worst. He was carried to the platform, the rack having done its evil work on his joints. When he saw the block, slick with blood, and the sodden, mucky straw beneath, he cried out and twisted away, so that the crowd jeered.

Two days later, Anne Boleyn met a similar end. That execution I did not attend, having given myself no time the day before to complete some necessary task for my master. I had never been fond of her, but I could not bring myself to watch her die; if I did, I would have to write that to Bess.

She was given the favor of a French sword, instead of an English ax. Her black hair was tucked up under a plain coif, and once her eyes were covered, the swordsman struck a clean blow.

The king was rid of his troublesome second wife, and he celebrated by announcing his betrothal to Jane Seymour the very next day.