It won't go away if you ignore it 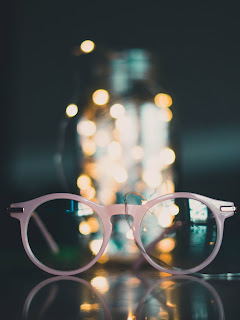 Well, it's been a while since I've checked in here.

Life is busy - the world has opened up sufficiently that I have a few craft shows leading into the holiday season, and while I didn't miss doing them as much as I expected, I'm glad to be back in this limited fashion. So I've been sewing and organizing for those, and I've been working on my 1930s book since the third book in my Tudor series is basically complete and will be out in the early spring.

More on that later.

And in personal news, I had an eye doctor appointment last week. I've been putting it off for some time. My regular eye doctor - who's actually an ophthalmologist, not an optometrist - was the one who found the problem two years ago and sent me to the retina specialist, which ended in me having eye surgery. Shortly after that referral, the doctor's office burned down and he relocated to a nearby suburb until he could find a new location in town.

He's back now, and I continued to avoid him for some time, because, stupidly, I was afraid he would find something else. As far as I could tell, I'd recovered well enough from the retina surgery, and five follow-up appointments had confirmed that. But my right eye, the eye that was operated on, has gotten blurry - blurrier - and I was concerned. But I was also scared, and didn't really want to know what was going on, so I put it off.

I'm an idiot. The doctor did find something, but not what I was afraid of. My retina seems to be fine, other than a tiny bit of residual scarring which makes a straight line bobble a bit at the far right field of my vision. The blur, as it turns out, is a cataract.

He made a point of reassuring me that cataracts are not a disease, they're simply something to be taken care of with a routine outpatient / in office procedure, and my only likely complication will be several rounds of eye drops and a change in my prescription.

Cataracts do run in my family, though he told me it's not an issue of heredity, but simply aging. So I'm feeling old, and cranky with myself for not dealing with this sooner. Also, because once you know a problem exists, you see things - literally, in my case - I now notice that I see colors slightly different in my left and right eyes.

At least it's not a time-sensitive condition. He told me it's not a risk, it's an inconvenience, and it's on me to decide when it becomes too inconvenient. Right now, fixing that inconvenience would be worse than tolerating it, but I'm looking to book in with the specialist in January so that I can return to my usual blurry but glorious Technicolor vision.