And here it is - the video of my live reading from A Wider World and Lady, in Waiting. It ran a little longer than expected, because I did Margaery's introduction from the previous book and also answered a few questions at the end.

Let me know what you think! 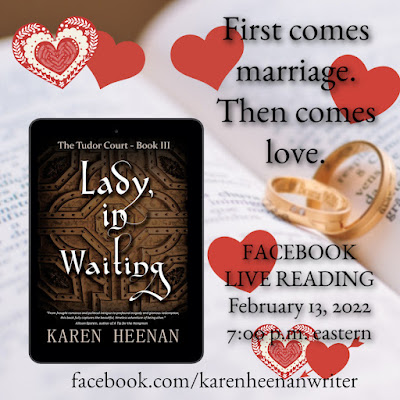 I wasn't certain I would do a reading again - before it was mandated by the publisher, so I had to - but it turns out I kind of enjoy the terror in a strange way, so...

There's no point in having stage fright for only a few people.

Sunday is the Super Bowl. I'm not watching, but many of you are, so you can always tune in for the replay. Also, if it's at all an issue, I promise to be done by half time.

The link for the event is here.

If you have any questions you'd like answered, please post them here or on the event page on Facebook, because if I'm wearing the glasses that allow me to read from the Kindle, I won't be seeing what pops up on my phone screen.

I may be wrong, but I don't think you need a Facebook account to watch. (If it doesn't work, watch this space instead - unless it's a total trash fire, I'll be posting the video here within a few days of the reading. 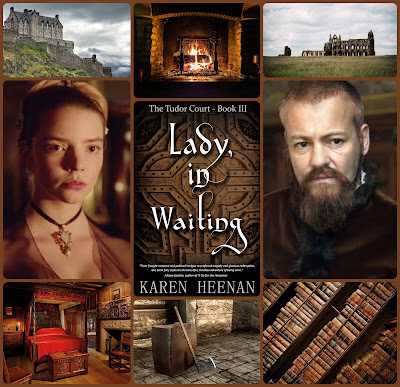 Because I love free samples (the "look inside the book" feature is the best thing Amazon's ever done), below is Chapter One of Lady, in Waiting.

I hope you enjoy the beginning of Margaery's story, and if you're so inclined, you can check out the rest here.

If my father hadn’t lost his head, my life would be very different. In point of fact, he did not lose his head; it was severed from his body with three strokes of an ax.

I should know. I was there.

One day I was a happy child, the center of a loving family, and the next my father was dragged from the house, accused of treason, and executed. My family left England, and I grew to womanhood far from home.

With such uncertain beginnings, a young woman might find herself capable of anything. She might wish to escape her situation so badly that she proposes marriage to a man she’s just met, thinking it will give her some measure of control over her life.

Less than a week after our wedding, my husband left for England. My grandmother and I followed on the next ship.

We had been out of England eighteen years, during which time Winterset had become Robin Lewis’s home. It was one of the reasons I married him. When he first appeared at our isolated home in Normandy, I resented his presence, but I quickly realized he was a solution, not another problem: he was more acceptable than the men put forward by my mother and her husband, and if I married him, my grandmother could return to her beloved estate.

Tall and bony, with red hair gone thin in the back and a decided way about him, Robin was not my dream husband, but then I’d never dreamed of marriage. I knew only the sort of man I did not want, and if Mama had her way, those men would soon be lining up in the lane, eager to claim my inheritance.

Family money aside, most men wouldn’t consider me a prize. While I was young, and looked well enough, I had been raised away from society and my manners showed it. I read books that young ladies did not read. My opinions were strong, and I had been known to raise my voice in company and interrupt my betters.

Such behavior was not cherished by my mother, and my stepfather found me troublesome in the extreme. He tried various methods to break my will, and I ran away to my grandparents after one incident, having forced a stable lad to swap clothes so I could travel unnoticed.

After close questioning, my grandfather declined to return me to their care. With my grandfather, I could live as I pleased—within reason. After his death, Grand-mère deflected my mother’s marital plans until I made one of my own. Then she fell in with my scheme, deeming it no worse than theirs, and possibly—when she realized we would return to England—far better.

Robin was the one who balked. He claimed to be too old and set in his ways, and that I would not be happy. I bribed him with Winterset, and a promise not to disturb the peaceful life he’d built there. I was an heiress, I blithely assured him, and could make a new marriage when he died of old age.

But I didn’t want that. I didn’t know Robin well—he did not allow himself to be easily known—but I liked him. In time, I thought we could learn to care for each other. 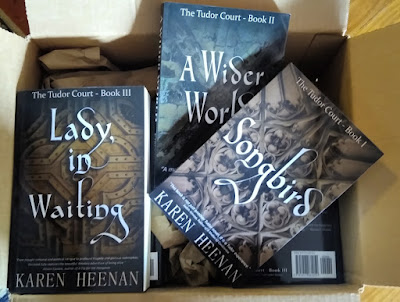 There's something special about book mail. Any book mail.

When it's your own book mail, it's even more special.

Yesterday I received my author copies of Lady, in Waiting, in addition to a box of Songbird - only had one copy left, and I'd like to be prepared for people who want to purchase the entire set.

I just love seeing all the covers together! The font (which is called Gondola, by the way) is as much a part of them as the actual ceiling art.

Signed copies of any of my books are available for $15 each, including shipping (same as Amazon, but with a signature and a bookmark!) 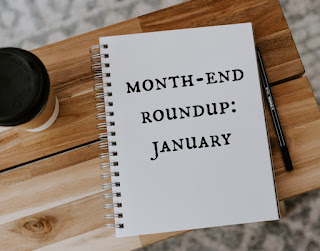 This has been an interesting month. Sometimes I feel like a lot got done, and other times I feel like I've been spinning my wheels and spattering myself and my surroundings with mud.
But here goes. Accountability for the win:
Lady, in Waiting
1. Got the e-book uploaded and set up a pre-order. (You can get yours here).
2. Finished working with formatting friend and got the print book uploaded and set up for order. (Link above).
3. Did an abundance of scheduled social media posts for January and into February to make the world aware of its existence. (How can anyone not know by now? I feel like it's all I talk about.)
My Sister's Child
1. Edited 38 out of 44 chapters. Will finish these edits by end of first week of February and then put this book to rest for a while.
2. Mostly planned out the sequel. Mostly. I'm not a natural outliner, but the story has some shape and I'm trying to work with it. If I have hooks and some wire, I'll have something to hang the rest of the story on.
Songbird
1. Audible finally transferred the audiobook back to me, so my narrator and I got together to change the opening and closing credits. I learned how to upload an audiobook to Audible and Findaway Voices, which will distribute the audio to everyplace BUT Audible (including your library, if you ask them to buy it).
2. Asked my cover artist to update the audiobook cover to remove publisher name. Re-uploaded cover art to Audible/Findaway.
A Wider World
1. Audiobook isn't mastered yet, but nevertheless got updated cover so it's ready when I am.
Looking forward to February 14 and getting Lady, in Waiting out into the world!
Posted by Karen at 2:18 PM No comments: