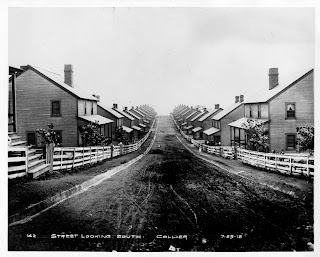 There are three houses in Coming Apart, and they all mean different things.

The first is Ava's house in Scovill Run, the coal town in upstate Pennsylvania where she has lived her entire life. Scovill Run is fictional, but based on many coal towns in my research, all of which grew up around the mine, and none of which were particularly nice places to live.

Ava's house is one half of a twin. There are two bedrooms upstairs, and a sitting room and kitchen downstairs. There is no electricity, and water is supplied by a shared pump in the yard. The other plumbing needs are taken care of by an outhouse. Most of the heat in the house comes from a wood stove in the kitchen; there is a coal stove in the front room, but it is only used on special occasions, because coal is expensive and the men who mine it can't often afford it. 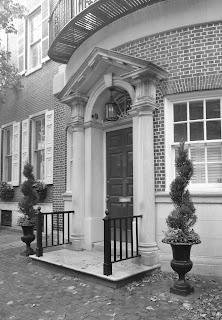 Claire lives in Philadelphia, in one of my favorite houses on Delancey Place. All the houses on the street are either brownstone or brick, three and four stories. They were the houses of the wealthy then, and for the most part, that block continues to be single-family homes. The house I chose for Claire stands out because of its round front. I've always liked it, and jumped at the chance to let her live there.

Not only that, it was up for sale several years ago, so I have a pretty good idea of the interior layout.

There is a third house in the book, which will only be explained in oblique terms because of spoilers, but it is a house I actually lived in during the late 1980s. It's also in Philadelphia, several blocks south of Claire's house, and was built before the Civil War to house mill workers.

It's what Philadelphia calls a trinity house (Father, son & holy ghost), with one room on each floor. The entire house was no bigger than a standard two bedroom apartment. But it was pretty cool, living in a place that old, and knowing that the underground railroad had used several of the houses on the block as shelters for runaway slaves making their way to freedom. 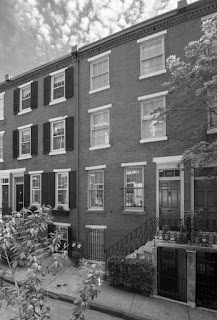 I have pretty clear memories of this house, but again, it also was up for sale a few years ago and the renovations that were done after my time there as a renter were pretty significant. They couldn't make it bigger, but they made it nicer. One of the few things that's still the same is the clawfoot tub in the third floor bathroom, which my roommate had painted gold on the outside. Thirty years later, it's still gold.
I wonder what my characters would have thought of a gold bathtub?
Posted by Karen at 3:36 PM