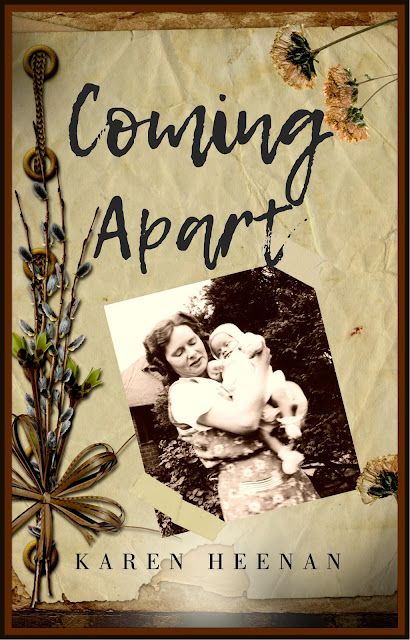 I was trying to hold off sharing this for a while longer, but I've been talking about this book for so long, that I just can't. And I love this cover too much to keep it to myself.

Coming Apart is the first book in my Sisters series, of which there will be at least three books. That's what they've informed me, so far, anyway.

When I first talked to the cover designer, I said I wanted something that looked like an old photo album, the kind with black paper and stick-on corners. Alas, the designer is too young to be familiar with such things, but the direction she went in, which I think of more as a scrapbook, is even better. I love the pressed flowers, the tape on the corners, the creasing of the paper under the photo.

And the PHOTO. That's my great-aunt Margaret, holding my Uncle Dick, her brother's second-youngest child. It's perfect. We were originally looking at vintage stock photos of babies or women holding babies when I realized that I had albums of photos to which I hold exclusive rights.

Albums full of photos. So what did I do? I went through them all, after I'd picked out the cover photo for this book, and chose photos for books two and three. I don't know everything about those books yet, and won't really know until after the first drafts are done, but I know the titles and the overall theme of each book, and that was enough. 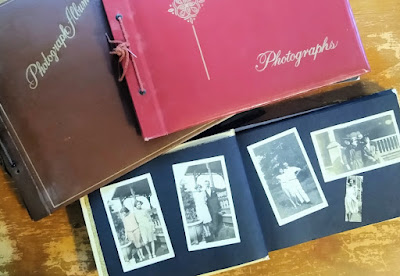 Also, my cover designer in this case is also a writer, and she's doing well enough with words these days that she's retiring from custom cover designs and I wanted to get these done before I lost access to her. (She'll still be available for tweaks when the books are finished, but I didn't want to risk not getting a matched set, not when I loved the first cover so much).

I'll be back soon to share the back cover blurb and an opportunity to get a free prequel novella to Coming Apart.