Don't rain on my parade 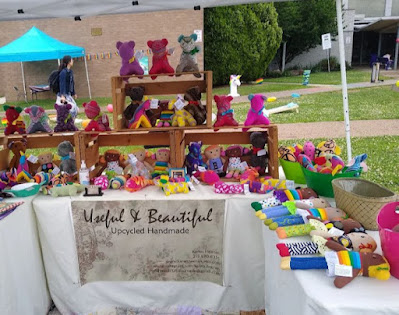 Yes, I still sew and do craft shows! It's just not as big a part of my life as it used to be.

Last Saturday, I had the privilege of vending at a local Pride Fest. The day started out chilly and rainy, and I almost canceled because I hate having to pull all my work into the center of the tent so it doesn't get wet, but I sucked it up and set up anyway.

And I had a blast. Usually, when I'm located near the stage at an event, I want to crawl under my table, but this festival had the best music and I had a stellar view of the drag show which concluded the festival.

I've been lucky to find a lot of rainbow fabric at thrift stores lately, so I had a nice selection of merchandise and business was pretty good, but the day was as much about people watching for me as selling. It was such a positive, uplifting event - it made my heart happy to see so many people feeling safe to be themselves and walking proudly with the people they love, displaying a veritable rainbow of different Pride flags.

And the little kids especially loved the drag queens. How could they resist the hair, the makeup, the colors? The joy? I haven't seen that many happy kids since Santa wrote a fire engine through town throwing candy canes.

The weather cleared in time for the show. As the emcee said, "we wouldn't allow it to rain on our parade."