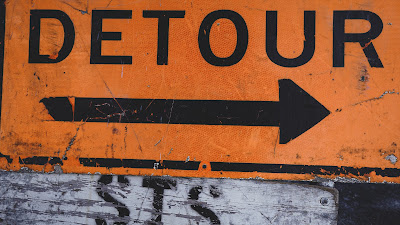 Often end up going very far sideways.
Back in the Before Times, in late 2019, my husband and I scheduled a trip to Edinburgh for late March, 2020. We all know what happened next.
In May of this year, I tried to see when our airline credit would lapse, and was informed that it already had - but if I booked then, I could use it. So we quick-planned a trip to Dublin, which was the only thing close to being in budget since gasoline, Airbnbs, and everything else has gotten more expensive.
Less than 2 months out from the trip, our Airbnb canceled on us. She had a valid reason, but trying to find another affordable stay on such short notice wasn't easy. We ended up going with a hotel, because if I wasn't going to have a kitchen, I wasn't going to share a toilet with a stranger, not at the same price.
This past Friday, we got a phone call that my husband's mother had just been taken to the hospital with renal failure and possible pneumonia. She's been in a nursing home since right before Covid, and her dementia has really taken a turn for the worse because of all the isolation. We drove to New Jersey, waited while she had a procedure done to insert tubes into her kidneys, and then sat with her in the ICU. We went back again on Saturday and Sunday, and even though she's improving - they moved her out of the ICU this morning - neither of us feel good about leaving the country when she's in this state.
It's difficult enough worrying about her when long distance only means crossing the river and driving 50 miles. Walking around a foreign country and trying to enjoy a vacation while one part of your brain is waiting for the phone to ring is just not a prescription for a successful trip. So we're staying home. My husband will still take the time off from work that he had scheduled, and we'll do a few things around the house, obviously drive over again to visit, and, selfishly, I will now have time to do the pre-publication stuff that I was supposed to have done on the Friday through Sunday while we were at the hospital.
Although it wasn't the best planned vacation, it's a disappointment. But we've talked it over, in a non-ghoulish way, and have decided because of her age and frailty that we're just going to hold off on long trips for the time being. When it's safe to travel again - and I mean safe in every possible way - we'll go to Paris. That was where we'd wanted to go post-Covid anyway, but the fare was too damn high. By then, we'll have earned it.
Posted by Karen at 10:26 AM 2 comments: 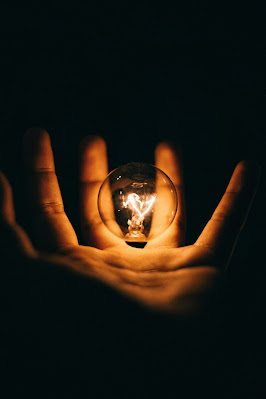 I don't know anything about brain science, and if I tried to learn, my eyes would probably glaze over. Which is not to say I don't respect the hell out of how our brains work, and I think some of it will never be figured out by science, no matter how hard they try.
I'm working on the second book in my 1930 series, and it's been going well. The plot line involving Ava, my primary main character, is basically complete, even if I haven't written all of it. For Claire, the secondary main character, I can't say the same. I know how she starts and I know where she ends. But until recently, I had no idea how to bridge that gap.
The other day, I forgot to have my morning coffee. Then I forgot to have it in the afternoon, and by the time I made a pot for after dinner, I knew it would either have no effect or it would keep me up all night. I was good with either.
It seemed like it wasn't going to work. I went to bed at midnight, my normal time, got into bed, closed my eyes, and the answer to all those plot questions slammed into the front of my head with the force of a speeding car. I got a full explanation of what goes wrong, who's involved, who's behind it, the reactions of the key characters, and how it leads to the ending I already had in mind.
None of this had (knowingly) existed in my brain up until that point.
I didn't want to get up. I laid there for a good half hour, telling myself the story, repeating the best phrases, hoping I would remember it come morning. And then I remembered - I never remember that stuff come morning. So I got up, went downstairs and turned on the lights, and wrote eight pages of notes.
Then, of course, I was too wide awake to go back to sleep, but it was nearly two. So I flopped on the loveseat downstairs, and turned on an author interview podcast whose host has a very soothing voice. When I'm up and walking, I enjoy the interviews. When I can't sleep, she takes me out in minutes.
And it worked. I slept until five, when the birds started to sing. Then I went back to bed for two more hours. When I got up, I was afraid to look at my notes, for fear they weren't as brilliant as I thought, but they were good. Not brilliant, maybe, but solidly plotted, and now that I know what's coming I have no qualms about writing this midsection of the book.
Writing isn't the problem. Filling in those occasional blanks is the problem.
And if someone can explain how my brain can deliver a fully plotted section of story out of the blue, complete with dialogue, I'd really appreciate it.
Also, could it maybe choose a more convenient time of day?
Posted by Karen at 11:31 AM No comments: 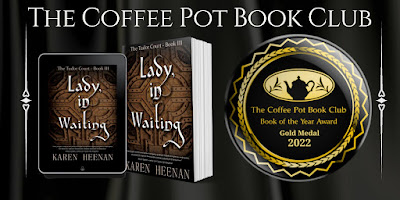 I know my entries lately have been all 1930s, all the time, but my abiding love for the Tudor period hasn't flagged, just gone a bit dormant.

Until this morning, when I awoke to the news that Lady, in Waiting had won gold in the Tudors and Stuarts category of the Coffee Pot Book Club Book of the Year awards!

That'll get me moving in the morning.

I'm particularly happy about this because it's the third book in the series, and now all of them have placed in the CPBC awards - Songbird got Book of the Year in 2020, and A Wider World got an honorable mention (or honourable, since it's a British site) in 2021. Three for three, and it feels pretty darn good. 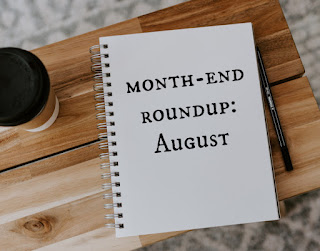 August feels like it's been all new book, all the time.
Probably because it has been.
I did a few final edits to the Coming Apart ebook file and got it uploaded and ready for pre-order. (The paperback file is still waiting for one advance review to come in, for the inside front page - if I don't get it by Labor Day and/or one reminder, I'll do without).
Many marketing graphics were made, many marketing tweets and FB posts were scheduled.
I sent out a newsletter alerting subscribers to the pre-order on August 18. (Are you a subscriber? You'll not only have access to even more of my ramblings, you'll get a FREE prequel novella to Coming Apart which gives even more insight to the characters. Sign up here.)
Aside from the new book, I worked on an editing job, wrote about 20k words on the new WIP (sequel to Coming Apart, because the sisters weren't done talking to me), and made an attempt at recording the audiobook for Lady, in Waiting. I think it will work, with a bit more practice, but I'm going to hold on the project until cooler weather - it's pointless to try to record anything during lawn care season; I'd have to stay up until all hours to get peace and quiet.
I've also been experimenting with advertising on Amazon, and I think I'm finally getting the hang. I tweaked some ads and the other day I set up ads in Australia and Canada. I get very few sales there - I've had more sales in Germany than I've had over our northern border.
I also prepared for and had a podcast interview - Authors Over 50 - which will air sometime in late September. I'll share a link when it comes out. It was a really fun interview, some about the book but mostly about the experience of starting a new career over 50, what took so long to write that first book, etc. I really enjoyed it!
Lastly, a fun bit. (Well, it's all fun, really - I have a weird sense of what's fun). The other Saturday I attended a Zoom social of historical fiction writers. We met on Twitter under the tag #HFChitChat, and while there's a fairly steady conversation going online, it was nice to get together and see each other's faces. Several of us have books out recently or coming soon, and we got to prop each other up, soothe nerves, and cheerlead for each other.
It takes a village to make a book these days.
Posted by Karen at 2:25 PM 2 comments: