Going down with the ship 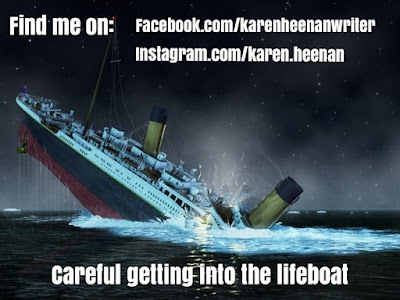 When I joined Twitter in 2017, it was basically to see what was happening in the world in real time - a fast way to catch the news and to see what the latest stupid was in the world that people were talking about.
Then I found my people. The writing community, which has been a generous, welcoming, inspiring place to hang out for the past five years. I've made friends - real friends, who I've met in real life, and some faraway but just as real - and I've learned a lot and hopefully shared some interesting bits for others.
I found my old publisher through a pitch event on Twitter. I've had actual conversations with writers and performers who I'd never have the guts to speak to in person. I've indulged my current obsession - currently Ted Lasso season 3 fan theories - and found new ones.
And the way it looks now, that all might be gone, because one very rich man couldn't think of anything better to do with $44 billion than to buy something and break it, with apparently no thought for all the people for whom Twitter is actually their connection to a world they can't reach any other way.
I'm still hopeful, though. I'm rearranging my deck chair to sit near my favorite people and keep up the conversation until the lights go out.
** Apologies to all those who lost their actual lives on the Titanic. No disrespect at all, this just feels like we're watching a ship sink in real time and there aren't enough lifeboats and everyone is getting into a different one (Mastodon, Tumblr, Instagram, try this beta, try that one, let's all just go back to Facebook).
I never imagined that the potential loss of a social media platform could make me sad. But it does.
Posted by Karen at 1:00 PM

The saddest part is what a waste of $44 billion .... what good that could have done for so many people. Not a twitter user (or any social media either... just my blog)

How much good could have come from that money. If you could literally solve problems - poverty, disease, etc. - buying a social media network just feels trivial.

Where does it end? How much money does one need to accumulate?

I was a casual twitter user but now, I won't waste my time.

It's hard to even conceive of numbers like that, and what good could be done with that kind of money.