Well, as weekends go, this one has had its ups and downs.

My original plan was to curl up with the February issue of BWOF, trace a few new patterns and sew until I was cross-eyed. But that was not meant to be.

Veterinary crises seems to come in waves - first Vlad came and got cleaned up and took up residence in the guest room. Then Lily had to go to the ER for her embarrassingly-located abscess.

Now Thomas has been sick for the better part of 2 weeks, and the vet still doesn't know what's up with him. He's lost almost 5 pounds in that time, he's drinking but refusing to eat, his hair's lost all its luster, and he just looks sad. He's had tests, he's had more tests. It's like veterinary episode of House - every test just lets them know what he doesn't have. Right now, they're torn between not knowing and suspecting lymphoma of the kidneys. And because he's FIV+ (for the non-cat-experienced, this is an immune deficiency syndrome for cats which works basically the same way as HIV; it can remain dormant in their system for ages but when they get sick, it more or less welcomes the illness in with open arms and throws it a party). 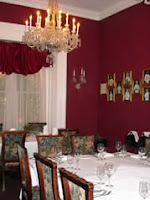 The vet doesn't approve, but I'm leaning toward letting Thomas go to that big kitty condo in the sky. I don't want to see any animal suffer, but watching him revert from his happy affectionate self to the fearful, feral cat he was originally (because of pain, I'm assuming, and also because he seems to process being medicated and fed as violence toward his furry person) just hurts too much. He's not Thomas anymore, and I can't imagine what the vet could come up with that would turn him back into Thomas. Certainly not the ultrasound, needle-guided aspiration of his kidneys that she wants to do on Tuesday.

On the plus side of the weekend, Mario and I went to the movies Friday night to see The Wrestler. It's gotten a lot of buzz and I thought I'd like it, but it was amazing. I watched a lot of pro wrestling as a kid, and seeing some familiar faces from the 70s and 80s just enhanced the documentary effect. I'm not a big recommender of movies, but go see this one. Mario did ask the question, "Why is every movie set in New Jersey a tragedy?" but as someone who was born there, I guess he's entitled to ask.

Last night we went out for dinner for my birthday - yes, 45 got somewhat lost in the shuffle this weekend, and that's okay by me - and it was fabulous. We went to The Restaurant School, which is only a few blocks away from the house (good for a cold night when I wanted to dress up). There are 4 different restaurant options - French, Italian, American and the Great Chefs room. The prix fixe menu there comes either with or without a wine flight that tailors your wine to each course. We went for that, and it was good. It was very good. It was so good I woke up this morning still full.

I'm supposed to be in the workroom finishing up my blouse, but I haven't gotten up the motivation yet. I did the buttonholes last night after we got in from dinner - he fell asleep on the couch, full of wine and French food, but for some reason gluttony made me energetic. It's looking good, I'm really glad I went for the alternative side of the fabric (and thanks to those who gave me that word for it instead of the reverse). Today's work, when I get to it, is to sew on the buttons, do the hem and figure out exactly what I want to do with the sleeves because the elastic just isn't doing it for me.
Posted by Karen at 1:18 PM

So sorry about Thomas. I understand how you feel. Our cat, Fred, is about 14 yrs old and shows signs of kidney failure. While he is definitely holding his own for the last year, the vet keeps mentioning what sounds like terribly expensive heroics in the future. I did all that kind of thing before I had my kids, but now they're here, I think my $ should go toward the humans, insetad. I certainly won't let Fred suffer, I'm just not going to go to all expenses to save his life. He's had a very good, and long, life with us for the last 12+ years. It's a hard decision, but I value quality of life over quantity.

Good luck with those kitties. Jeez, and I thought toddlers were attention consuming.

I double-taked when I saw your blouse- the pattern drawings didn't do that one justice! And I like your version of the sleeves.

Many sympathies on the sick kitty, hope things get better soon...

That is a tough call on the kitty. Just before my senior year of college, the cat that we'd had since I was six got really sick all of a sudden, and we finally decided to put her to sleep because her kidneys were failing a couple of weeks into my semester. My mom still kind of regrets it at times, but it was hard to see her suffering so much.

And I could say so many things about New Jersey, but I'll refrain. Or just save it for my Jersey cousins. ;)

I went the same thing with my old kitty Joe. He just stopped eating one day and a billion tests later no one could figure it out. My old vet also disapproved of my decision to let him go....but like you I felt that he was so unhappy and the syringe feedings just weren't enough to keep him going. I found another vet (that my new kitties all see) that was much more sympathetic.

Oh, poor Thomas. I hope you find the best solution for him.

Happy belated Birthday! I'm glad you had a good time.

Your blouse is looking good!

Poor kitty. I felt awful when I had to put my diabetic cat to sleep but he was suffering and it would not have been possible time wise or money wise to try the insulin route! My Beast is also positive for FIV and so far she's fat and happy and you can't ask for much more than that. On a lighter note, Happy Birthday! The restaurant you went to sounds fabulous and no way would I have been able to sew after that.