When did it start? 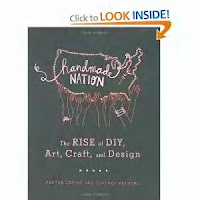 When did you get bit by the sewing (crafting, knitting, insert-your-obsession-here) bug?

That's something I've been thinking about lately because of a book I recently read - Handmade Nation, the Rise of DIY, Art, Craft and Design, by Faythe Levine and Cortney Heimerl.

I picked it up because I've been doing a lot of pre-season craft show work and I was thinking about much more interesting craft shows are recently than they were when I was a kid and got dragged to them by my mom or a relative. A lot of the time these days, there's plenty of stuff I'd like to buy, and quite a bit I can't afford - which isn't what craft shows used to be either. But then again, I'd rather see something I want that I can't afford than a whole room fully of crafty goodness that I wouldn't give house room to.

The book contains short profiles of about 25 crafters of all kinds, but what interested me the most was that almost all of them, when asked where desire came from to make things, said that they grew up around someone (a mother or a relative) who made something. It didn't have to be the kind of thing they grew up to make; it was enough to be raised around creativity that it sunk in.

My mom could draw, and while she didn't much like to sew, she could. There was a machine in the house, and every once in a while lightning would strike and she'd want to make something. It usually ended badly, with much swearing and a wadder in the trash can, but that's another story. My aunts sewed; my grandmother sewed. They embroidered, they knitted, they tatted.

I remember being a little kid and always having some kind of project going, whether it was painting, making furniture for my doll house, sewing clothes for random dolls, trying to build a Barbie-scale log cabin in the back yard out of sticks (too much Little House reading, I'm sure). Many, many projects involved Elmer's glue, which I thought was the greatest thing ever created. What else could you mix with torn-up white bread to get clay? What else could be painted on fabric to get a waterproof effect for Barbie's raincoat? What else . . . well, you get the idea. I was in love with a glue that you couldn't sniff. (I sniffed Crayolas instead - the ambrosia of a fresh 64-box of crayons!)

There were beads, sequins, yarn, fabric, glue, paints, crayons, etc. in my room, and something was always in the midst of turning into something else. I guess it's not surprising that I still have the urge to make stuff, almost all the time.

What about you? Is it nature or nuture? Were you surrounded by creative women growing up, or did you catch the bug all by yourself?
Posted by Karen at 10:40 PM

I grew up surrounded by women that made stuff, whether sewing, knitting, crocheting, making yo-yo blankets, embroidering, rag-rugs, you name it. I thought every family was like that.

My Grandma inspired me by teaching me to crochet before I went to school and giving me my first treadle sewing machine. My Mom could sew but was too busy raising us 5 kids to do a lot of creative work. As far as I can remember I always had some project going.

Nurture for me too - my dad was talented at drawing, esp. cartoons and my mum sewed and knitted. I tried everything but loved making dolls clothes the most. (Incidentally playdoh was what I turned to for sniffing delights!).

My grandmother knitted, my mother sewed and knitted, my father built computers from kits. What else do you do with spare time if you don't make stuff?

My mum never made a thing -it was my dad that was always making and mending things (his dad, my grandpa was the same) and my dad who showed me how to use a sewing machine when I was eleven years old. I got the bug then.

My grandma did a tiny bit of embroidery. My mum was working full-time with four kids - i think she might have done something if she could have had the time. But she coooked with great interest!

I believe many of us got the bug out of necessity to keep us occupied as children. Thank Goodness there was limited childrens television and no internet back then:) I got the bug from my mother, she made everything and was very crafty. During the cold winters we did all types of crafts they involved clay, crayons, glue, yarn, string, fabric, paper dolls/design school, and food. A snow day and most of the summer meant crafts all day long.

I loved freshly minted mimeograph paper for school tests for my sniffing pleasures. I was always a musician when I was young and didn't think I had any talent for the visual arts. So not much crafting in my younger years. Then the mosaics bug hit me and I found I could do something visual. Knitting came next thanks to my sister, but sewing has stolen my heart. I think permanently.

Grammy was a seamstress, Mom sewed, knitted, crocheted, embroidered, cooked & baked from scratch (oh, how I wanted storebought cookies when I was growing up LOL)

Mom taught me how to knit, crochet & embroider by the time I was 6 but I never actually made something til I was about 15 (a Lopi sweater - popular in my junior high & high school years about 1978-1983). Sewing didn't come til grades 8 & 9. Even though I got a late start - I think it was already in my genes !

Interesting that most of the comments relate to growing up around creativity. That's not my story. I took Home Ec in grade 8 and HATED the cooking part but absolutely LOVED the sewing part. Nothing has changed in 36 years. All of my interest and learning around textiles is self directed. I'm thankful for the way the Internet connects me with others that sew. Only one of my friends sews and she lives 2100 miles away.

I ALWAYS wanted to make stuff, I remember seeing magazines at the grocery store with "100 things to make for $1" or something like that and begging my mom to buy them for me. My mom knitted, but not much. I don't know anyone in my family like me at all, no idea where it came from.

Thanks for the post, brought back all kinds of memories.

I did not grow up around women who made stuff. My mother was not handy at all. My grandmother sewed, but had stopped making clothing by the time I remember her. She did make doll clothes for my Barbie though. Really stylish Barbie clothing in fact. I was encouraged to be artistic and all sorts of art materials were available as well as art lessons. In fact I went on to get my BFA in painting. I started sewing on my own with the machine my grandmother no longer used.
There was encouragement all around me even if no one actually 'crafted'.

I started s post with the manifesto,
"I make stuff."

It is really important to me that my child sees me making stuff, both at home and at work. So many people take their kids shopping with them, and so few make stuff in front of the kids, that I worry kids will have a distorted vision of the balance production and consumption.

You know what really creeped me out when I watched my kid play Club Penguin? It was that the kids don't know anything about each other except for the stuff they've bought and accumulated.

My mom was a jack of all crafts when I was growing up. Mainly sewing and stained glass. Talk about opposites! She showed me how to sew when I was little, then we did quilts together when I was in college. I got into sewing seriously when I got my first place on my own. First it was curtains, then aprons, now party banners and I love it. And my mom has gotten more serious about quilting, so we get to be fabric junkies together. :-)

It definitely runs in my family-- my mom has always been very crafty, and is the one who started teaching me how to sew (on the machine when I was around 7, and a bit of handsewing before that). She always encouraged me to do other crafty activities too, so that was a big part of my playtime growing up. Both of my grandmothers are also crafty--sewing on my mom's side, and more general craftiness on my dad's. I remember her doing things more like quilling and decorative painting. My mom's older sister is the one who got me interested in scrapbooking--she took it up when it started becoming popular in the 90s, and gave me a kit for Christmas one year when one of her kids drew my name in the cousins' gift exchange lottery that year (I was about 15 at the time.) Sewing is still my first and most-enduring love, though, and while I'd like to think I would have found it eventually, I'm glad I got to do so much of it growing up!