In a dark wood wandering 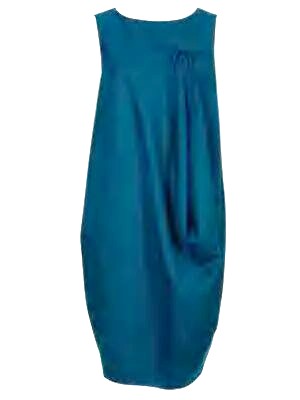 Burda has done it again - delivered the English translation of their magazine with instructions that might as well be written in the original German, that is.

Or possibly not - I could probably feed the German instructions into the Google machine and get back something resembling instructions to make this dress.

Why do I want to make this dress?  That's another thing entirely, and I'm not completely sure why, but when the September issue arrived yesterday, that was what jumped out at me.  I hated the photo - the model was so contorted you couldn't tell what the dress was supposed to look like - but I found the line drawing intriguing, and when I looked up the online photo, I decided to go for it.

And then of course I see that it's a TALL pattern, and last time I checked, I'm still not tall.

I decide I still find the pattern intriguing, though there's a chance it will make me look like a bag of potatoes.  Maybe that's why I find it intriguing?  Because most of the time I can't just head straight for a flattering pattern; I have to wrestle with something first to make it work?

I trace it off, noting that the front pattern piece is so ginormous (to account for the drape) that it's wider than my fabric.  Thankfully I've chosen a non-directional print (a silk twill from Paron's) so I laid out the pieces the wrong way and still had enough left to cut the front and back upper bodices, armhole facings and hem facings. 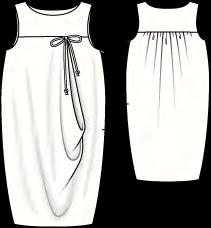 How did Burda go wrong this time?  Let me count the ways.  First off, the diagram where they tell you which pieces to trace - it specifically states to trace pieces 1 through 7.  Which I do.  And fold the page up and put it away, not noticing until later that the list of pattern pieces in the written instructions also includes piece 8, the back hem facing.  This is when I start muttering under my breath, partly because I should have realized that there were 2 facings.

The swearing starts when I have all the pieces assembled (minus the missing facing) and I realize that the instructions begin with the drape.  There's no mention anywhere about the upper bodice.  Ever.  It's beside the point that I don't need them.  They're instructions - instruct, preferably from the beginning.  Someone will thank you, and not write cranky blog posts about your inadequacies.

Then I read the instructions for the drape.  Twice.  Three times.  That they are awful is an understatement.  Riddle me this one:  "For the draped fold on the front, fold the front along marked fold line, right side facing in.  Stitch along the upper edge from the fold edge to the seam mark (seam number 1), then stitch upward to edge of seam allowance at the seam mark."  Still with me?  "Here, clip allowance diagonally into the stitched corner.  Pull the draped fold out and push the pointed upper corner to the inside, approx. 8" wide."

From there, they deal with the back.  "Gather the upper edge of the back between the asterisks to 9 1/2 ins."  (They neglect to mention that pesky back upper bodice that you're supposed to connect it to.  Details, details.

After that, they cover side seams, the zip and some sketchy description of the armhole facings.  If I didn't know what I was doing, I'd be so stinking lost.

I finally figured out my mistake - the "marked fold line" is an almost invisible straight line next to the diagonal line where the 2 pieces of the front pattern piece are taped together, and it's noted on the pattern sheet with large words in Russian and German, and a discreet "fold" written below, so I missed it.  I'm still confused, but it's becoming clearer.

More later, when I finally get the drape draped.  And then decide I look like I'm wearing a silk twill potato sack.
Posted by Karen at 11:59 PM

Whether you like the finished dress or not, please show pictures of it. That picture and line drawing have interested me and I need to know how it works out. Thanks!

Don't you just love Burda instructions? I actually understood the drape directions until it got to "Pull the draped fold out and push the pointed upper corner to the inside, approx. 8" wide." Huh? Look at it this way: The NEXT time you make this dress, you won't even need the instructions.

I tried a Burda in the early 1980s. By then I'd been sewing for 25 years, so like you, didn't really need the instructions, or so I thought. They were so convoluted that I swore off Burda then. This looks like it will be very attractive when you've finished it.

I'm dying to see the finished dress - it is really interesting looking and I love the idea of it.

I say, just throw the instructions in the bin and work out what to do from the line drawings and the pattern pieces! Poor Burda, they really need to improve this.

This pattern looks really interesting - which issue is it from? Can't wait to see the final dress.

This style is so intriguing! I do hope that it works out well for you.

Thanks for that hilarious post - you cheered me up (I'm trying to make pockets from a Burda pattern at the moment and in the photo they've managed to get the model to stand so that none of the four patch pockets are visible!).

It's not the language, it's the instructions. I live in Switzerland, I speak German. I could use Burda's original instructions in German. But I don't. They do not make sense, never. I gave up on using them, they only confuse me.

Wow, that is an interesting dress, though! I just got my renewal form, so I had just about decided to let it go. Bein' unemployed and GLP wanting $90 a year for the subscription...luckily I have a couple of months to mull it over.

I will be interested to see this baby made up, regardless of how you feel about it when you're done.