More than a UFO

UFOs are Unfinished Objects.  What do you call an object that's never been started, only obsessively planned and talked about and delayed and procrastinated and ignored . . . and reminded?

Whatever we want to call it, I've got one.

Way back when Mario and I first started seeing each other (friend stage; not even dating yet, though I had plans) he asked how hard it was to make a jacket.  I said that it would depend on the jacket, plus I hadn't started sewing for men at that point.  Why?

It seems he's always had a yen for a particular jacket.  Anybody remember the jackets Jimi Hendrix wore, the funky, velvet, Sergeant Pepper bandleader type jackets?  Pseudo-military with too much gold braid?  Frock coat on acid?

That's what he wanted.

What's my excuse now?  He still talks about it.  There's a TV commercial with a quick flash of Hendrix wearing one of those jackets and he points it out.  And he's not normally like that.

I ask if he'd really wear the thing if I made it.  "Absolutely!" he says.  "I'd probably never take it off." 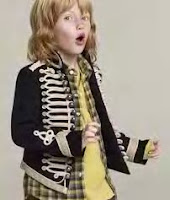 I'm not sure how that would fly at work, but whatever floats your boat.  I guess I really need to start thinking about how I want to make this jacket.  I have a few mens patterns around, but nothing that's going to come close to.  Time to look at the historical patterns and see what I can morph into something resembling what he wants.

He looks so quiet.  Here I am all this time trying to liven up his wardrobe with print shirts when what he really, really wants is a frock coat on acid.

May the force be with you :)

This could prove to be very interesting, to say the least.

Please, please, please keep us posted on you progress on this project - if, in fact it becomes an actual project! Really, Karen. Mario doesn't ask the time of day from a clock! He really deserves this jacket if he wants one!

oh....wow! That's quite the jacket (didn't Michael Jackson wear something like that - only more glittery?).
Go for it! And Good LUCK!

congrats on your chickens - I have 14 ( and 1 rooster ) - I love them. We used to clip their feathers on one side to stop them being able to fly out of their enclosure. They love food scraps and love the weeds I pull out too - esp those soft thistles and grassy weeds. Unfortunately I have had a couple of chooks die when it gets over 100 for a few days in a row but it doesn`t snow here at least. We don`t have racoons but unfortunately introduced foxes are a problem.

Maybe you can find a place that sells patterns for marching band uniforms. That jacket reminds me of one I wore during the 60's.

I love the one Debbie suggested. I think this is a totally cool project, and really not out of the ordinary, except for the braid and brass. It would be nice to see one close up--like a band uniform or something, just to see how they handled all the rope and hardware.

This sounds like an amazing project! It could look very elegant with the right braid, etc, etc. Men really do get the short end of the stick in fashion. We get all the pretty styles to choose from, and the men have only very basic things to choose from. I think that he'll look fantastic.

Well Karen, I think you have your work cut out for you. That jacket has A LOT of details. But knowing you, you can make it with no problems at all. Mario would love you even more if you made it.

Back a while ago, the blog "bubblegum for breakfast" author made an amazing Balmain jacket... Bubblegum4breakfast.com. I'm sure it will give you some ideas! Great project and I know you will have a ball with it.

You totally made the right call on waiting. Seriously, only after someone married me would I undertake such a project. But it's going to be awesome!