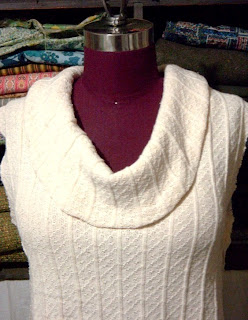 Did I mention the other night when the rotary cutter broke and my hand hit the blade that I was cutting out cream sweater knit? Could there be a worse possible fabric, other than possibly white silk (which will never see the inside of my sewing room) to risk getting covered with blood?


Somehow, when it happened, my first instinct was to grab my thumb - mostly so I wouldn't look down and see what I did. I made it downstairs to the kitchen before it got messy, and so, now that I'm feeling better, and the bandage on my thumb is small enough to work with, my sweater knit was waiting for me, still immaculate, on the cutting surface where I left it.

I finished cutting with scissors. I'll get back on the horse, really, I will - life without a rotary cutter would be too stinking inconvenient - but for now I'll go it the old-fashioned way. I take the long way for almost everything else, it won't kill me.

The sweater knit, a cream lightweight cable knit, is from Fabric.com about 2-3 years ago. They had a great price on sweater knits, and I bought a bunch, but most of them were worth about what I paid for them. This looks like it'll actually have some staying power, and it's going to be yet another KS 3740, the cowl neck sweater. Because it's flattering, it's quick, and I have almost no sweaters left in my drawer for fall.
Posted by Karen at 11:18 PM

Very nice. That's an elgant neckline. I have one piece of cream flecked sweater knit with no ribbed edges, and have never worked out what I can make it into.

P.S. don't suppose you could show what the collar pattern piece looks like?

Good instincts! A cut on your thumb must be very inconvenient. Once I could not use either thumb for two weeks, and I wasn't even able to put an elastic band in my hair. Thumbs; useful instruments. :).

How do you finish the seams on this knit? And have you ever tried making buttonholes in a sweater knit? I'm about to sew it for the first time, and I'm a little nervous.

Your shirt is coming along nicely!
wishing your thumb happy healing!

I like the fabric and the neckline on the top. Are you adding sleeves?

It is fairly miraculous that you managed not to bleed on the white sweater knit! Looks like a great wardrobe staple.

It's coming along beautifully, fabric is gorgeous. Glad your booboo is getting better.