Some questions on the sweater

﻿ ﻿ I had a few questions on my "Did I Mention?" post that deserve an answer.

First off, there was a question about making buttonholes in sweater knit. It can be done, but it really depends on the knit. There are different types of sweater knit and I would only even attempt it in a more stable (no visible holes if you stretch it) kind of knit. That "all one piece" feel to the knit would make it behave more like fabric. That being said, I'm sure there's a way to do buttonholes in knit with a looser weave, but I'm not willing to risk unravelling something that I can't put back together.

On the other hand, snaps work well on sweater knit, and I love the look of those oversized snaps.  Or you could always sew buttons on the outside and have the best of both

﻿﻿﻿ ﻿﻿﻿ With regard to the collar piece, that is one of my favorite parts of this KwikSew pattern (3740). As in any good collar pattern, there is an upper and under collar piece. In this instance, the under collar is significantly smaller. You sew the two collars together at the widest part (the hem), and then bring the upper edges together to be attached at the neckline which, since the under collar is shorter, turns the upper collar underneath so there is no seam visible from the right (upper) side. The way it lays generally keeps the seam allowance to the inside, though with this knit and its tendency to ripple, I pressed the seam allowances in and then ran a seam over them. The knit hides the stitches completely, and the collar would hide them anyway.

The other thing I like about the collar on KS 3740 is that if you're using a stripe (or a rib/cable knit), the stripes line up in a chevron pattern on the center back of the collar seam.  Cool. 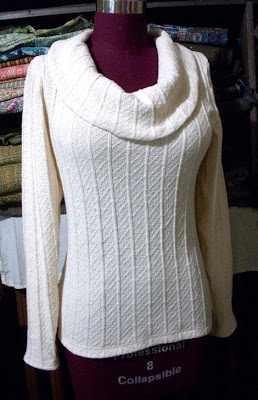 As far as finishing the seams on sweater knit, I just zigzag them to keep them from fraying. I don't have a serger, so I'm sure if you do there's a much better/neater option. But that's what works for me.

I hemmed the sleeves and hem on my coverstitch.  I could have just used the regular machine, but the coverstitch really deals with the raw edges of the hem, and zigzagging there wouldn't have been an option because of the knit's aforementioned tendency to ripple.

And now, without further ado, is the completed sweater - maybe not worth the blood, but good all the same.  I'll get a lot of wear out of this.

I got my Colette patterns in the mail today.  While I don't have enough yardage of the fabric I was considering for the Ceylon dress, I did find a good khaki bottomweight with some stretch that would work for the Clover pants.  So those will probably be up next . . . unless I'm distracted by something else.
Posted by Karen at 11:50 PM

Thanks for the pic. Obviously not just a rectangle. Wonder if its worth me buying the pattern? (Kwik Sew is expensive here). Its a great collar and I think would work really well for me.

I love this pattern, too, and your sweater knit is inspiring.

I think it's beautiful! Okay, you're right, it's not worth bleeding over, but it turned out gorgeous!

Oh, I do need to try that pattern. Your sweater is lovely.

That's a very pretty swewater. The big collar is outstanding.

Thanks for the buttonhole answer. The sweater is really lovely, and I'm happy for your that there are no bloodstains on it