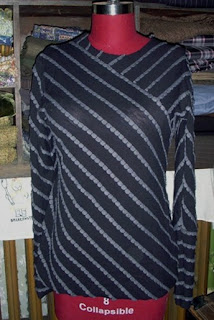 It's still not done, but progress has been made on the striped sweater.
Can I still call it striped, when the stripes run in every direction except up and down?

Still not finished: neckline, because I'm having a thought, and hems on both cuffs and the bottom of the garment.  I also might reshape the side seams a little bit; it looks a little baggy on the dress form, but then again, Evelyn and I haven't been the same size for a while now.  So maybe not on the reshaping.

What gave me the idea for this was a top worn by a co-worker.  You know that pre-ruffled knit fabric everyone was making skirts out of this past summer?  She has a top made from the narrowest ruffles, and it had the same bias seam on the front.  The back of her top, meanwhile, was just a solid knit, no ruffles at all, and it was sleeveless. 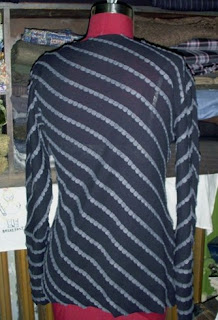 But nothing succeeds like excess, so I also cut the back on the bias, and then for good measure, I split the sleeves and chevroned them.  One up and one down, of course, and I cut the lower sleeve on the cross grain, just to be different.  Or normal.  Whichever.

I've been distracted from sewing -- again -- because I've been trying to do a little housecleaning.  Never a good idea.  I just find stuff and lose time trying to decide where it came from, why I kept it, if I should continue to keep it, and where I should put it.
I found another box of crap (not really) from the relatives.  Etsy is going to be getting another big bulk listing really, really soon.  I'm getting very fond of them, they're clearing out my rubble quite nicely.

Actually, it was the first batch of Etsy proceeds that paid for the chicken coop. 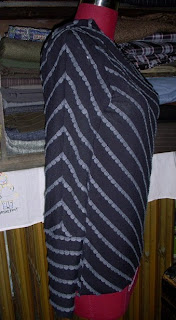 Also, work has been insane (nothing new there), I'm behind on my craft show sewing, and, oh, yeah, the holidays are coming.  I'm feeling a little humbug right now, though I might get over it.

Or I might not.  Though I did get a little twinge of Christmas when I unpacked one of those boxes and found my grandmom's Christmas village that she used to put under the tree - glitter houses and tiny trees -- my favorite part of the holiday even when I was little.  Part of me wants to keep them; the practical part says to take their picture and pass them on.  If I haven't seen them in 30 years, I haven't really missed them, and we don't do a tree.

Back to to the sweater: note to self, even if not having your picture taken with a flash, watch what color bra you put under this sweater!
Posted by Karen at 10:35 PM

Fabulous.
I love this top.

Love the top too. I was a little concerned from your last post but this is really cute. I think you should keep your Grandmothers village...sometimes pictures are not enough!

Keep your Grandmother's village. If you let it go you'll regret it forever. Some sentimental things are meant to be kept, though most can be let go.

Love what you've done with this sweater!

That is CUTE! You don't do a tree...so do a Christmas village!

What a clever sweater! Very cute.

I agree with Carolyn and Luckylibbet - keep your Grandmother's village. Don't worry about the tree.
Also the sleeves on the top are very interesting.

Love, love, love what you're doing with the sweater!

I am somewhat obsessed with directional stripes and just bought two different striped fabrics to play with. Love what you're doing with this!