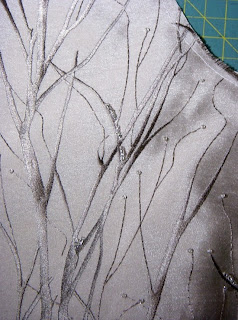 Don't worry, the next post won't be titled "Chestnuts Roasting on an Open Fire," or anything cheesy like that, at least, not unless this dress takes a drastic turn.

Yes, it's a dress.  It was actually on its way to becoming a dress by late last evening, but I had the post scheduled to publish and never got back to tweak it.

And once I decided what pattern it would be (BWOF sheath dress with V back, the one I based the wedding dress on), it immediately started to bother me that it needed something else.  Something . . . more.

And since it is the season of glitter and excess, I had some beads leftover for the craft show and decided to put them to use here by adding some "ice" and "snow" embellishment on the bare branches.  I think it's fairly subtle, and it strikes me as somewhat vintage, as well. 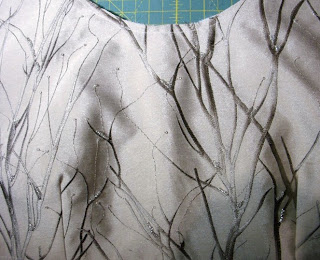 I started playing with the beads last night around 10:00, and all of a sudden it was midnight! I guess that proves that you can do some things successfully after 10:00 p.m.  I'm glad I got the cutting over with earlier; I don't think I'd have tried that since there's almost no fabric leftover.

I underlined the bodice front and back with white batiste, for structure, comfort and also because when I decided to add the beads, I knew it would work better that way.

Tonight I spent another 2 hours beading the bodice backs.  So that's 4 hours down now, and not a machine stitch has been sewn, other than to baste the two fabrics together, and to sew the bust darts.

Tomorrow night I would actually like to start sewing, but that may not happen.  The neighborhood theater is having an opening, and whether or not I've been involved in the costuming (I haven't this time), I still like to go.

On the other hand, I'd like to wear this to a holiday party next Friday night, so I'm going to have to wedge it in somewhere.
Posted by Karen at 10:45 PM

Oh I love it! With the added beads. Can't wait to see it finished! g

I think you have really enhanced that fabric - I really liked it before but it really is fantastic now! It makes it more "sparkles of snow and ice" and less "dead stick".

This is going to be spectacular!

BEADS!! I commented on the previous post before reading this post. What a great wavelength we are on - sheath dress - and what an incredible improvement you've made on the basic idea!

Well done. I've been sewing outside my comfort zone (style and fabric and pattern company) but BEADS is amazing. Wow. Thank you.

sionsimoOh, I so love what you are doing with this fabric and the beads. Subtle, sopisticated and creative.