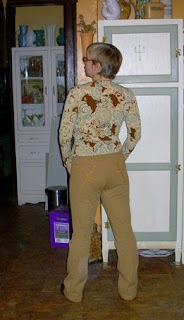 Not great jeans, not yet.  But damned good jeans.

These are the Frankenpattern of the infamous Jalie 2908 stretch jean, the Ottobre jean and the fly front from the McCalls men's shorts pattern I made for Mario this summer.  I'll go over the pattern changes in detail in another post, once I lay out the various pattenr pieces and document what I did to them.

I wore these to work today; they've decided to give us casual Fridays from now on, so long as we don't "abuse it."  So I wore my new jeans and got abused because they weren't denim enough for a jeans Friday.

Also, having held off wearing these to work because I wanted photos, it was such a busy day that I never had time to ask Andrea to take a few pictures of me in them and instead had to make do with table photos and asking Mario if there was any way on earth that he could take a flattering picture of my ass.  Apparently it's too much to hope for, but this is what I have to show for now.

Basically it's the upper part of the Ottobre pattern (lowered slightly from Mom jeans rise to still-above-my-underwear rise).  The waistband is slightly narrowed, and contoured (Ottobre, not Jalie).  The back pockets are from Jalie, with random patterns done with the satin stitch on my machine.  I fused lightweight interfacing on the backs of the pockets before doing the embroidery; one of the things I hate the most about stretch jeans is that the pockets end up stretching out when you stitch them, and then they stretch more and look wonky when you wear them.  These stayed nice and flat.

The shape of the lower leg is the Jalie boot cut.  Ottobre offers a straight leg or a boot cut, and I've tried both, but the I think the Jalie shape is more flattering.

Structural changes that I've arrived at after several pairs of previous unsatisfactory jeans: the fly front application that I used on his shorts this summer, which is the applied fly piece along with a fly shield on the inside.  Yes, it adds a bit of bulk compared to that piddly little tab that both Jalie and Ottobre seem to think can adequately anchor a jeans zipper, but have you ever encountered a pair of jeans that didn't have that thickness at the zip?  It would feel flimsy without it.

Also regarding the zip - because of the narrow, cut-on fly on both the Ottobre and Jalie patterns, I can't get the zip to sink back far enough beneath the overlap so that it's properly invisible.  With the applied fly, I had much better luck with that, though I have hopes for better next time.

Pockets:  neither one of those patterns cut the pocket so that the lining doesn't peep out over the topstitching.  I've cut them lower and lower, but this time, since my denim wasn't particularly bulky, I just cut the pocket from the denim and then the pocket facing from a scrap of Liberty I had on hand.  I get a little bit of pretty, but none of it shows. 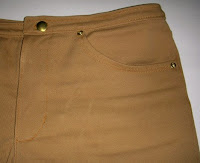 Also with the pockets - if there are pocket stays at all on jeans patterns, they are again piddly, flimsy things that don't actually keep your pockets from creeping or shifting.  Since my pocket was made of the denim, I decided to take advantage of its stretch.  I cut the stay all the way to the fly, and anchored it on both sides in the zipper installation.  In doing so, I also stretched the section of the pocket from the pocket bag seam to the middle, which does a tiny bit toward flattening my stomach without feeling tight.

I have no idea where this fabric came from.  It's been in stash a good few years, and I washed it when I got it, so there were no fabric.com stickers left or receipts rolled up in a fold.  It's nice quality, not too heavy and with just enough stretch.  I wore these for an 8 hour work day, out for drinks with a friend and then at home until after dinner, and while they accumulated a few creases from being sat in, all in all they held up really well and didn't grow much at all.  Can you tell I'm still haunted by the incredible growing Clover pants?

All in all, I'm really pleased with these.  There are a few things I'll change next time (but aren't there always?), and I also want to try cutting the pattern a size larger, and make them up in a non-stretch denim.  I actually prefer jeans without stretch, they're just nearly impossible to find, as is non-stretch denim in a fabric store that isn't basically dress-weight.

Working to finish a dress tomorrow that I would like to wear for my belated birthday dinner tomorrow night.  It's not looking good that I'll get it done, but you never know.  I also have a few other things I want to clean up in the workroom while I'm waiting for my first vintage pattern to arrive.
Posted by Karen at 1:04 AM

Wow, I wish I could put all those jeans features together and come out with a pair like that! Congratulations, and looking forward to reading more about your changes.

Love the new jeans! THey look fabulous. That color is great too!

I think these are better than "damned good".

Great color on the jeans, and a very nice fit. I'm happy to hear I'm not the only one who gave up on the Jalie fly - my go to example in a pair of men's KS trousers. Whatever works!

Amen to what everyone said, and I've even seen them in person. Sorry we didn't get a chance for me to take your pictures yesterday. They look fantastic on you, and I want that front fly insertion pattern that you used from the pattern for Mario.

They look pretty good to me, though since I saw you in your Jalie jeans and thought the fit was great, what didn't you like about them? BTW, Mood has non stretch denim of a good weight on their website. Get samples though, the description leaves something to be desired. I bought some Theory denim with about 1% stretch when I was in the store recently. It was a bit stiff, but washed up well.

They look great to me! I'm curious to see your fly changes. I don't have an issue with the zipper showing in mine (quite the opposite, actually) but I have been thinking the reinforced fly edge from a sewn-on facing would be nice.

I feel your pain about ever-growing stretch fabric. And the difficulties of finding good denim in fabric stores, although I seem to find fabulous non-stretch throwing itself at me when I haven't voluntarily worn non-stretch denim since about 1999. The stretch-denim around here is pathetic.

You look wonderful in these terrific fitting jeans. I admire your persistence and someday may have to give jeans a go.

These are perfect jeans for you. Great work.

Those are awesome! Great fit And good details. I was so amused by the bit about Mario taking photos of your ass that thE boyfriend asked why I was laughing.