Wow, this was a good start to the new year.  Looking at it as I went, I didn't feel like the month was all that productive, but I realized last night as I looked back, I made 8 pieces, and cleared 16 yards of fabric out of my workroom.  (Plus random pieces of knit that moved to Andrea's stash, but that's not the same as sewing; however, it still frees up more space, so I'm all for it).

First off was the tripleheader tshirt day at Annette's sew-in.  It cleared out space and expanded my wardrobe, all in one afternoon.  With snacks and friends included.  How fun is that? 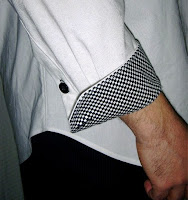 I also made my Retro Striped Dress, which I really love.  I've only worn it once so far, because it's been a little chilly for skirt-wearing, but I really have to suck it up and wear it again.  It could actually be REAL winter instead of this faux-November thing that's confusing every plant in my garden.

Also in January:  Mario's white-and-black shirt (pictured here because he finally wore it last night), my new jeans, the black Party in the Back skirt, and a knit dress which is finished all but the hem, so I'm counting it as January sewing.  Finish work, so long as it does get finished, can run over into the next month.

While I'm waiting for my first Titanic-era pattern to arrive, I started in on a somewhat late Christmas present for a friend's baby.  She loves something on Sprout called the Good Night Show, and her mother was unable to find her something called a Star Doll.  Could I make one?  Apparently I can, out of yellow bath towels, but now there are terrycloth fuzzies all over the sewing table and all I really want to do is work on something else.  I don't have a great future in selfless sewing.  I was pretty sure of that anyway, but this confirms it.  (Shirtmaking doesn't count as selfless sewing; I get a lot out of that in several ways.)

Beyond finishing up my dress and this strange stuffed object, and anticipating the trials and tribulations of Downton Abbey era dresses, I'm not sure what's up next on the agenda.  Possibly another pair of jeans, since I have them down to assembly line status now, or maybe I'll start playing with my Fatina dress pattern yet again, because it's going to be the basis of my YSL Mondrian dress knockoff.

Eventually.
Posted by Karen at 3:49 PM

Mario's shirt looks really great. I love the contrast fabric inside the cuffs. And selfless sewing? If it's a small project that I'm doing because I want to and the recipient doesn't know about it, that's one thing (I can always quit if it's too tedious). But if it's requested, I just resent the tarnation out of it. You are not alone.

That is a fantastic shirt. So stylish. Mario looks very handsome, if I may. :)

I look forward to seeing your Edwardian sewing - it's right in my research frame, so I particularly enjoy the fashion of this era.