He must be, or would I ever have these photos of Butterick 5008, the latest creation for the upcoming production of the Tempest?

Here's the review, but I think the pictures really tell the story.

Pattern Sizing: S-M-L in this envelope, XL-XX-XXL in the other. I made a medium.  Very handythat almost all the actors are in Mario's general size range.  I think that's why she's been giving me the men's costumes.

Did it look like the photo/drawing on the pattern envelope once you were done sewing with it? Yes, remarkably so. All the reviews I've seen for this pattern say that it's very accurate to the drawings, and it is. I'm just surprised when it happens. I think I've sewn too many Burdas.

Were the instructions easy to follow? Very clear and easy. "Easy and great for beginners" is definitely the rating for this pattern. It looks much more complicated than it is.

What did you particularly like or dislike about the pattern? I'm doing a few costumes for our local theater company's production of the Tempest, and I was asked to do this one for the king. I think it looks sufficiently regal. (Although Mario was apparently channeling Hamlet in his poses here - I'm not going to argue, I got him to pose in a ruffled satin shirt. If he wants to pose with a skull, who am I to criticize?)

I really liked the collar band on the shirt, which snugs up close against his neck and holds the ruffles well. The costumer said not to bother with interfacing, but I couldn't . . . I just didn't use the good stuff. Still, this seemed to work with just cheap interfacing. I'll probably be seeing this in performances for the next few years. Certain costume pieces seem to live forever.

Fabric Used: Poly satin. A nice look, but slippery to work with and a bear to iron. Every hem had to be pinned before pressing, because unless I used scalding steam, I couldn't get this stuff to hold a crease. And after steam-scalding my fingers once, I decided that a few pin holes weren't going to be the end of the world.

Pattern alterations or any design changes you made: None other than leaving off the ties, which aren't conducive to quick costume changes. The costumer said she was probably going to use a hook and eye at the throat, and I left it up to her whether she wanted a button at the cuff, velcro or a hook. 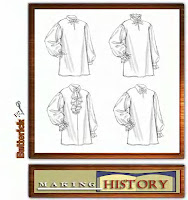 If I was making this for my own purposes, I would have doubled the neck and sleeve ruffles so that there were no visible hems. From the stage it won't be noticeable, but I hated hemming them when a folded ruffle would have been so much nicer.

Conclusion: I think this time I owe him more than dinner.  We may have ventured into the realm of "very special jacket that I have been promising and procrastinating about making since before we were dating."  Yikes.
Posted by Karen at 5:38 PM

Ah, "the play's the thing..." Bravo to both of you for a god performance.

Oh man, all that work on satin polyester. I would have rebelled. It is fancy!

Truly patient! My hubby would never have agreed to the pics! :-)

Just a heads up I'm featuring your blog in a new blog feature Poppet's Pick Blogs that will post in a couple of weeks. Enjoy!

I made myself protective sleeves for my fingers, out of scraps of leather from a skirt. (Yes, finger condoms)

Making bias tape affords lots of steam scalding opportunities, and I got tired of it.

Cut two pieces, vaguely dart shaped, rounded at the finger tip. Sew seams on the outside.

Make sure they are small enough to stay stuck onto your fingers; they stretch a bit.

Not too awkward. Beats the heck out of burned digits. Not perfect, but cheap, fast and easy if you've cut up something leather lately.