My friends know I'm not particularly techy.  I have, thus far, managed to maintain a blog, an Etsy shop, and a presence on Facebook and Patternreview with dial-up internet service.

Know why?  It works for me.  I spend all day at work on a computer, barely moving from my chair unless it's to chase down a lawyer.  When I get home, I still want to do things online, but I don't want to spend my entire evening in another desk chair.  Thus, dial-up.  If it takes some time to load something, fine.  I'll go sew a seam, or throw in a load of laundry or spend some time talking to Mario while he watches TV.  The speed, or lack thereof, has never bothered me and it's actually caused me to get a lot more accomplished while waiting for it to accomplish something.

But now, with Blogger's new, evil interface, Google Chrome has entered my life.  It's entered my computer, somewhat unwillingly, and it's wearing my dial-up connection like a too-tight shirt.

I fear that higher speeds may be in my future.  But that's okay, I'll just let it do it's zippy, unnecessary thing and I'll still wander off and do other things.

The illustrations here have nothing to do with my technological mutterings.  Tuesday was Mario's 40th birthday, and all special occasions warrant a new shirt.  He picked this fabric out last year, it's a William Morris print that I ordered from eQuilter, and despite the fact that it's intended as a quilting fabric, it's actually a very nice lawn.  It's not Liberty, but it's close.  He refused to justify the cost of Liberty for a shirt. 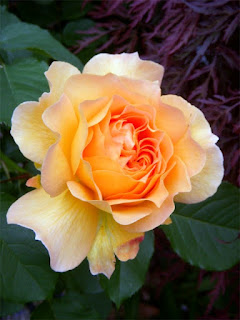 The colors are much more the detail photo at left, but for some reason I couldn't get them to come up properly on the distance shot; it's really not a pink shirt.

And because this post doesn't have enough flowers, a gratuitous photo from my front garden, where all the roses have decided to bloom at once.  This is a particular favorite.  I don't remember the name, but it starts out this gorgeous golden-apricot, and by the time it's full blown, it's a pale honey-ivory shade.

So I guess I'm back.  Right now Chrome is grudgingly working, but I've been promised a bandwith upgrade thing by the weekend, and apparently then my life will change, the sun will rise brighter in the morning, angels will sing and my computer will move at something faster than the speed of mud.

Happy Birthday to Mario and what a beautiful shirt. Fantastic pattern matching going on with that pocket. I need lessons on that.

I still have dial up, and for the exact same reasons that you do.
And I uninstalled a stealth google chrome.
And I like reading your blog and seeing the wonderful things you sew, because I can't do either.

It's really early for roses even in your area. What a year.
The shirt is gorgeous and it must be your monitor because it doesn't look pink at all. I am impressed that he is willing and chose to a flowered shirt. It's lovely fabric and as always, a beautiful shirt. While my dh will wear pink he doesn't do flowers.

We had dial-up until three years ago this past January. So liberating that I can remember exactly when it happened. Now both of us can be on at the same time, drinking our morning coffee. All of your flowers are lovely. And some guys do wear pink shirts! Mine does.

My mom had dial-up for ages too, and she didn't want to give it up. Now she wonders what she was waiting around for. You will love it, even if you're kicking and screaming now! (Am also impressed that you were doing blog postings and picture uploadings with dialup for so long! That's dedication!)