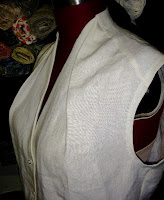 The heat's still on, and I'm still not sewing a whole lot as a result.  Of course not being able to sew is making me want to sew unbelievably badly.

Since the workroom is 110 in the shade, I've been hanging out with the fans, reading, practicing embroidery stitches and plotting future projects.  I've also ducked in and out to work in the garden - outdoor work in short bursts won't kill me, but sustained gardening might just cause me to melt into the compost pile.

Bonnie's still clucking away; I really think Gilda had an underlying problem because even though she's gotten hot and panted a few times, Bonnie's managing just fine with the fan I installed and the occasional freezer pack in the coop on really bad afternoons.  And the patio umbrella angled so she doesn't bake.  Bird has it better than we do, when I think about it.  (I try not to think about it too much).

All this blather leads up to the month-end review for June.  My output is larger than what's pictured here - I did a stack of baby dresses to take up to the consignment store, but I haven't gotten the photos uploaded yet.  I may wait until I finish the next batch.  When I can sew.

So, June. The Burda 9/11 #128 white linen blouse, which I think is finally getting worn tomorrow.  I haven't worn it.  I'm not sure why.  And I'm curious how crisp those pleats will be after walking out into 96 degree, 100% humidity. 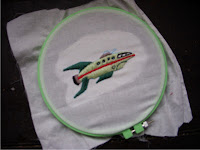 Also, KwikSew 3036, the kimono sleeve tee.  I like it.  A lot.  I like it so much there's a version lengthened into a dress lying half-completed on the sewing table.  I'd like to at least work on that soon.

Last but not least, and not really sewing, but at least stitching, the spaceship applique for Mario's shirt.  Which I really enjoyed doing, and even if I didn't, he's worn the shirt twice since then.  That's more than he wore it the last 2 summers.

Unbelievable, but it's hotter in Wisconsin than in Philly! Why did we move?

Can you move your sewing machine to your air conditioned room?