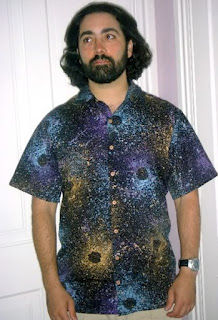 Sometimes a project needs a little tweaking.  A few years ago I made a shirt for Mario that has gone almost unworn (as in once per summer, to humor me). 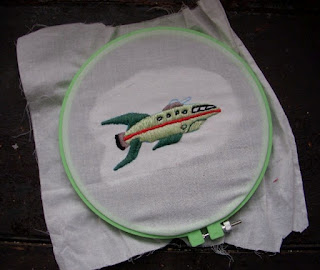 I jokingly asked if it would be better if I embroidered a rocket ship on it.

He said it would. 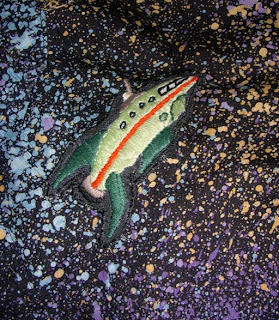 And could it be the rocket ship from Futurama?

So I did.  I found a picture online, copied it and drew it onto some scrap fabric, and embroidered it in odd moments this weekend.  Then I cut out the ship, got him to put on the shirt and pinned the applique to the left front.

I stitched it on with the machine, then added some final embroidery - the gun turret on top. 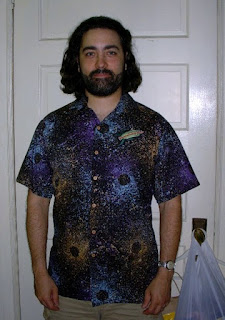 He likes it now.  Go figure.

I really like the Jackson Pollack in space look. I've never made my husband clothing that wasn't meant to be worn to a Ren Fest. I will be on the lookout for space fabric.

Awesome. Much better with the ship. And I thought Futurama too, before I saw you wrote it.

That is too cool!

LOLOL. He's right!!! It's much better with that rocket ship!!!

He looks so much happier with the rocket ship!
Andrea's comment made me laugh out loud!!

Now you understand why I am definitely on Team Mario!

Did you embroider that by hand or do you have an embroidery machine?

Hee, that is so cute. Sometimes it's the little things that make them happy.

That is super cool

Well, of course, now it's been personalized! A bit of you (the fabric) and a bit of him (the ultra cool Futurama ship!). A good compromise.