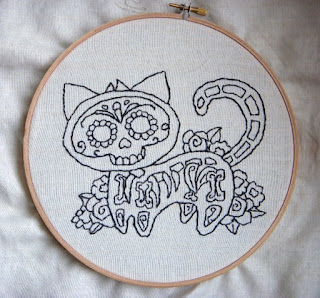 And there's even been some sewing.  Hopefully I'll have something to show by tomorrow.  It's just a top, but still, it's the first time I've been in the workroom for a significant period and accomplished anything in the last 2 weeks, so yay me!

I had off from work Thursday and Friday, and had all kinds of grand plans.  And karma bit me in the butt, in the sense that Max had an episode Thursday after lunch that caused him to be carted off to the vet (by taxi), to be poked, prodded, tested and sent home with several potential diagnoses and some medication that would control most of them.

I came into the bedroom and he was panting.  Panting is generally a stress reaction, so I got him up and made him walk, just to see how he was acting.  He hugged the wall and was swinging his head from side to side in an odd way, almost as if he couldn't see.  His back legs seemed weak.  He wasn't really interested in food and water.  Because of his diabetes, I was thinking any number of alarming things.  I called the vet, they told me to bring him down to get checked out.  He continued to pant and cry in the cab, and got sick twice.

At the vet, his blood glucose was normal, so it wasn't a standard diabetic reaction.  An x-ray was clear for tumors or anything pressing on a nerve.  So what was it?  Their two best guesses are an asthma attack or a pulmonary embolism (blood clot to the lung).  Diabetic animals do throw clots, and that would explain the respiratory distress and possible the other weird symptoms.  Of course, panic from not breathing could explain some of them as well.  Asthma?  He's 14, and first he develops diabetes and now asthma?  I'm almost hoping for the clot; it's more of a one-time thing. 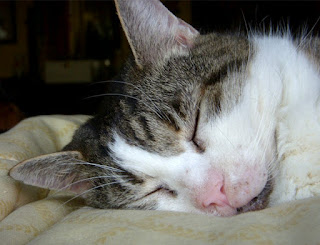 They could do a bunch of tests and give me a more definitive answer, but then I'd have to put Max through all those tests and me having a definitive answer wouldn't really do anything to help him out.  I don't want him tortured with tests and medicines and chronic stuff.  He's old; he's getting tired; and he deserves an easy end.  If it's a little sooner than I'd like, then so be it.  I'd rather let him go than keep him going, for me.

All that being said, by last night he was eating okay and climbing the steps again, so it seems to be resolving on its own, at least for now.

And this is also by way of introduction to my latest piece of embroidery, El Gato Muerto from Urban Threads. If not for Max, then it's a tribute to all the wonderful cats who've passed through my life over the years, and the many still to come.  There will be colors - lots of them - but for now it's just an outline.
Posted by Karen at 3:43 PM

Glad to hear that this crisis with Max has passed. I understand your way of thinking. Dealing with the senior fur kids can be difficult - trying to do enough but not too much for their own comfort.

Had a similar situation with a beloved dog, a pug. The vet said it was some sort of autoimmune disease and that I could take it to the vet school for evaluation, though the answer would probably be inconclusive in the end. We said we would pass on that. The vet then said that was exactly the choice she would have made for her own animal.

So sorry Max is having a bad time. Hope he is better soon.