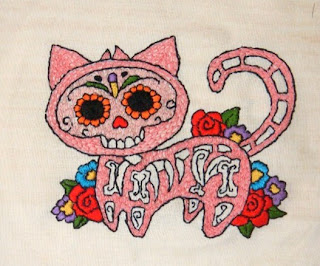 Sorry to blow my own horn here, but it's been so long since I feel like I accomplished anything, I'm happy to have 2 things done now.

First off, the Urban Threads Day of the Dead kitty, which I'm quite pleased with.  It didn't start out to be a pink cat, but how often do my projects at completion resemble my original idea?  The pink happened sometime after I started filling in the flowers, and I realized that pink was just about the only color I hadn't used for the flowers.

Not entirely sure what I'm going to do with this little guy (despite his pinkness, he's definitely a boy kitty), but I'm getting an idea.  It's not a me idea, so I'm resistant at this point.  We'll see where it goes.

** For Kathi G, who asked, I used a tight chain stitch to fill in the pink.  The solid areas are satin stitch, and the outline is backstitched.  Nothing earthshaking here, but it does the job.

Second project: a remake of an old dress, Burda 5/2008 #121.  I loved the dress in its heyday, but the fabric in the bodice really started to stretch out and show its age, so I knew it wouldn't get any wear as it was.  The dress spent a week or two marinating on the workroom table, and then I took scissors to it so I couldn't change my mind. 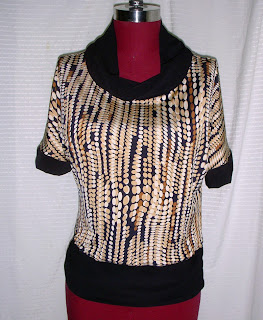 After that, it became the cowl version of KwikSew 3036.  The resulting top somewhat mimics the original Burda design - kimono sleeves, black contrast fabric.  Obviously it's not cut down to there, but sometimes that's okay.  Especially for work.

Despite how much fabric there was in the dress, there wasn't that much to work with after cutting it up.  Obviously the top wasn't salvageable, so that left the skirt.  Because of the cut-on sleeves, the pieces needed to be wider than anticipated, and somehow I ended up shortish on length.  I had planned a black bottom band anyway; I just made it a little wider and then ruched up the sides for interest (which of course shows not at all in the photos).

I wouldn't go to this much trouble remaking any old dress from my wardrobe, but I bought this fabric in Paris in 2008 when I met up with Trena, so it was a special dress.  And now it's a not-quite-as-special top, but that's better than sending it off to the thrift store.

Now I just wish it would cool off a little - the idea of wearing a cowl right now is enough to break me out in hives.  And probably that's why it took me 2 weeks from start to finish on something as simple as a knit top.

If nothing else, finishing this top has forced me to remember that I do know how to use my sewing machine, and that it's not 110 degrees in the workroom right now, just a balmy 85 or so.

Love the cat embroidery. I got this pattern after reading your last post. I want to embroider it for my daughter for Christmas. Can I ask you what stitch you used to fill in with the pink?
LOve the refashion too. I have had this dress on my wish list for a very long time. I really should make it.
Love your blog.

I still haven't sewn up one of my pieces from that trip! The curse of Too Good to Use. What a great save on this fabric, it has life in it yet.

The embroidery is awesome.

Nice to see your back in the sewing driver's seat. I like how you've reworked a memorable piece.