There's a New Chick in Town 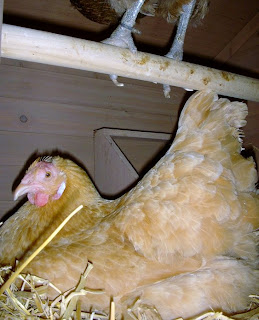 It's taken a bit longer than I expected, but as of this evening, there's a new chick in the coop.  We picked her up after work at a local urban farm - they have 25 or so chickens but since they sell their eggs, they only want to keep younger, higher-producing hens.  This one is about 2 years old, so she and Bonnie are the same age.

The farmer who handed her off had a few hens to re-home, but since I could only take one he asked if I would take this particular one - she's his favorite but he doesn't want to be sentimental and keep a lower-production bird just because of her hard luck story.

See her bald spot?  He called her Scalpie, because when she was a young bird she was attacked by a raccoon and her comb was torn off.  He nursed her back to health and hand-fed her because the infection from her wound caused her not to be able to see for a week.  But she's healthy now, just a little strange-looking.

Her odd head is more than balanced by her plumage.  She's a Buff Orpington, basically a golden blonde, wide-bodied hen.  She's good in cold weather, so I won't need to worry this winter.  She's a big girl.

I thought Bonnie was big.  I introduced her new roommate and Bonnie was dwarfed.  They hung out, side by side, nibbling on veggies for about 10 minutes, then Bonnie puffed up all her feathers and jumped on her new friend.  Who promptly sat on her and pecked at her head until Bonnie apparently said "Uncle" or whatever chickens say when they give in to a superior strength.  This went on 4-5 times until Bonnie gave up and went to roost. 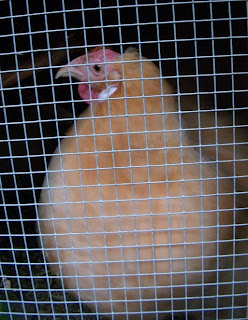 It took a while for the new girl to figure out how to get up to the roost, and then to squeeze her wide behind through the door, but she got there.  And decided, for some reason, not to get on the roost but to sit in the straw under it.  And under Bonnie.  Who will crap on her all night (because she can't help it and because she'll enjoy it).

I'm sure paybacks will begin at first light.  I'm getting up early tomorrow.

I can't just call her the new girl.  She's big.  She's blonde.  She's bossy.  I can't call her Brunhilde, because I'd shorten that to Hilda (which is too close to Gilda).  I'm wavering right now between Frieda and Helga.  I'm thinking Frieda.


That is so funny! I am sitting here laughing my head off! Haven't had any chickens for quite a few years but the fellow up the road sometimes donates fresh eggs to us. Good luck with the 2 girls.
Terry

Loved that post! It had me cracking up! I'm usually a lurker but I've read your blog for over a year now (or thereabouts) and just wanted to let you know how much I enjoy it. Thanks,
Pat

Awesome! I'm glad you got a new chicken, and it's probably good that you waited until the worst of the heat is over to bring her home. That's hilarious about the way they establish the pecking order. They are so much more efficient about it than humans are.

Oh goodness, that so funny. I missed your chicken stories. I hope Frieda and Bonnie become BFFs.

ROFL. What an awesome bird!

She's beautiful. We none of us are perfect.

That is so funny. Those two better get used to being roommates!