Theater Costumes and the Aftermath

This project took a bit longer than expected, and absolutely kicked my ass.  To be accurate, it kicked my back.

One of the best things about sewing, at least according to my body, is the fact that I have to get up every few minutes to press a seam, and therefore don't sit in the exact same position for hours at a time, until I try to stand up and realize I can't.

The problem with this pattern: poly velvet and poly satin, neither of which took nicely to pressing.  Actually, they took terribly to pressing - I tried a couple of test swatches and the velvet scorched and left indelible creases and the satin just melted into stiff black ridges.

So this project didn't get much pressing, just some light heat, some topstitching that sunk into the velvet and quite a bit of profanity.  Which I think worked best of all. 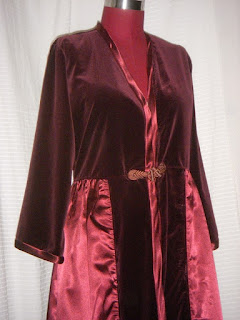 All in all, though, I'm pretty pleased with how it turned out.  As everyone assured me on Facebook, and which I know when I think about it straight, theater costuming is a whole different animal from the way I usually sew.  It's not going to get looked at from mere inches away, and hopefully no one is going to do the sewist's greeting and take her sleeve in their fingers to touch the fabric.

Even if they do, it feels nice.  It was just a bear to sew.

Oh, the other fun part of this project that I mentioned on FB - this was one of those cursed projects that didn't show its problems until thought I was done.  Then I put it on the dress form to get some pictures and the hem looked a little uneven.  I trued up the waist seam and smoothed the skirt with my hand and it looked . . . more uneven. 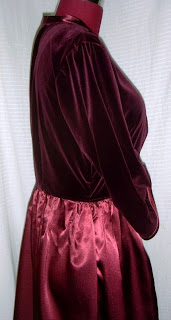 I took it off the dress form and measured the distance from the waist seam to the bottom of the hem band.  38" on the left side, okay.  And . . . 35" on the right?  WTF?  I've been uneven before, cut things slightly off or had the fabric grow a bit, but THREE inches?  The only part of this that was cut on the bias was the satin trim band, so that didn't cause the growth.

I have no idea what happened, and after a few minutes of hyperventilation (I had, after all, just sent a text saying "dress will be done tonight"), I carefully cut the hem band off, since it seemed to be the same width from end to end, leveled off the skirt so that it was the same length all the way around (what a concept) and stitched the band back on.

It doesn't look quite as pretty on the inside as it did first time around, but it worked, and it's done, and it went merrily off to tech rehearsal today for a trial run. 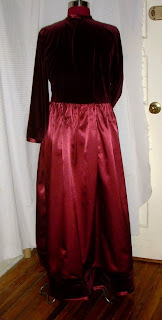 S
Since I haven't heard anything, I'm going to assume rehearsal went off okay and there are no tweaks to be done.  If there are, they should be minor.  I'm waiting until tomorrow to be sure, and then I'm going to have a serious cleaning of the sewing room.  And of the machine.  Velvet, yech.  It looks like someone slaughtered a burgundy teddy bear inside my sewing machine.

The room isn't much better.  Between velvet fluffs, shreds of satin and the self-inflicted mess of me dumping the remnant bin upside down while looking for something and not picking it up yet, my workroom is a soft sculpture.

This needs to stop, I'm losing things in there.  I've managed to misplace a manila folder full of embroidery transfers (almost an inch thick), a measuring tape, two seam rippers (or was it three?) and two yards of RED denim for Mario's jeans, along with the matching zipper, button and rivets, all of which were in a neat little bag with the fabric.

Which is nowhere to be seen.  Work tomorrow, then I'm coming home, having a glass of wine and going in after it.  If I don't post for a few days, you might want to send out a search party.

I remember a rayon satin bias cut gown for Berkeley Shakespeare that grew and grew. I had to true up that gown before every performance for the first week.

Heck, I had to rehem in .during. the performance because it grew so fast and the actress would trip on it onstage.

Well it looks impressive.
As for the sewing room, a glass of wine will help you start cleaning it up - slowly, of course :)

Isn't sewing costumes fun? Yeah, wine does help. I'm currently doing costumes for "The Little Mermaid" and do you know there's no such thing as a pattern for octopus tentacles? Then there's the fun of having to make two identical costumes because the part is double- cast and the two actors are totally different sizes.
But you're right; sewing costumes does require a different set of standards. I'm constantly reminding myself that it only has to look good from 20 feet away. Best of luck with the show, and I hope they give you a proper acknowledgment in the program!

Some fabrics need a bit of verbal abuse to make them behave... LOL. It looks great in the end!