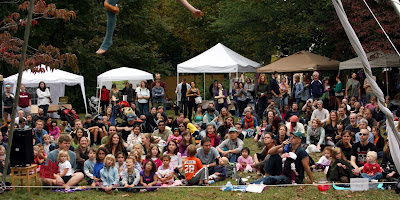 Saturday was an interesting day.  It was a busy weekend all around, but Saturday is what I want to share here.  After breakfast and the farmer's market, we went off to a craft show held at the local cemetery (rarely in use, except as a jogging track, yoga spot and picnic area).  There was a wonderful variety of vendors and a great selection of stuff, very inspiring.  I came home ready to do battle with the workroom and prep for my holiday craft show again this year.  I have a few new ideas bubbling, but for the moment I just cut out half a dozen of the small travel/cosmetic size bags that always sell well, and I'm almost done with them.

I spoke to one of the craft vendors and she gave me an interesting perspective on her work.  We were talking, and she commented on the jacket I was wearing, and she said, "Oh, are you a seamstress?"  I said yes, because I don't generally care what you call me: sewist, sewer, seamstress, whatever.  I'm a woman obsessed with her sewing machine.

She says, "I'm not.  I'm an artist who sews.  I'm no seamstress; have you looked at my seams?"  And I had, some of her sewn pieces were uneven and unfinished and looked handmade.  But because of her style and fabrics, it wasn't noticeable right off, and the people who were buying from her (she made 3 sales while we were talking) didn't seem to notice or care.  But isn't that the way?

She also showed me something she was wearing that she made for herself, and the inside was freaking immaculate.

I thought about it all Saturday night until my head hurt.  I grant that my craft show sewing is sometimes too complex for the item and the pricing.  But I think the way to go is to simplify something in the construction so that it's not as much work for me, rather than do the same thing, but in a shoddy way that would embarrass me to show it.

Like the little bags I'm making. When I did them the past 2 years, they were made with a Chinese brocade exterior and a fully lined interior.  The brocade was a nightmare to work with and the lining had to be hand sewn in along the zipper because the bags are just too small to get the lining sewn in by machine.  That added a significant bit of time and profanity to the project.

So I found a middle ground between "seamstress" and "artist with a sewing machine."  I found about a half yard of black pre-quilted lining fabric leftover from my black raspberry trench, and some good remnants with a decent weight, texture and color (but not the ability to shred when looked at).  I cut the  pieces out of both fabric and the quilted lining, zig-zagged all the pieces together, and then constructed the bags.  They're still lined, and anyone who's buying a small pouch bag for under $20 is going to be happy that they're lined, even if it's a self-lining with neatly zigzagged edges inside.

I'm still producing a decent product and I don't feel like I'm cheating or trying to scam someone by calling myself an artist because I can't be bothered to do something properly if it's not for me.

So, what do you think?  Do you use less care for your "art" than for your "sewing?"  Do you use less care for others (who won't notice) than for yourself?  If your business is hand sewn items, don't you think they should be made to the best of your ability, instead of passing yourself off as an "artist with a sewing machine" when it's perfectly clear that you sew very well when it's for something that matters to you?
Posted by Karen at 9:56 PM

Interesting what you encountered. I used to sell men's neckties at craft shows and local stores and always made them to the best of my ability. After all, your reputation is at stake. Now I only make them for family and still put the same care into them.

This is an interesting point. It's similar to that old question of what defines quality. Were the items fit for purpose? Perhaps they were well enough sewn for the recipients?

If it were me though, I'd want them to be made as well as I could make them, because, like Elizabeth D said, my reputation would be at stake. That might mean their production was unprofitable.

Oh dear this is a long post and very focussed on utility and profitability.

Stuff we make should be beautiful and well made.
Well then.
Both art and sewing are important!

Interesting! I've seen some very pretty clothes and bags in craft markets that were not well made, and I too noticed that it didn't affect sales.

I think you have to work out the target market... I'm guessing people who value a beautiful finish and understand the work it takes would be prepared to pay more for it, whereas others wouldn't necessarily think it was worth a higher price tag...

Sorry me again. Just to explain - where I was coming from is that I feel terrible for people who sell at a loss at craft markets!

This gives me a lot to think about! I sew both for myself and sometimes for others...and I often wonder if I am too obsessed about the little things that barely show rather than looking at the big picture. Who says that the inside has to be as beautiful as the outside?

She may not be an artist or a seamstress. She may be a businessperson. She needs to provide a product that will sell at a price point that people can handle, and she has found a way to do that. If the construction were more time-consuming, the product might be too expensive for people, so she could not make a living selling it. Claudine

Have you seen the quality of stock on the high street that people will part with their hard earned cash for?
I know that i'm very aware of the quality of what I make and of the rubbish quality that people buy without a second glance. I really do think it's down to people just liking the product, rather than the finish. Having said that I would not dare sell anything unfinished. I just couldn't do it.

I will wear something that looks sad on the inside, but I wouldn't sell it! But that's why I don't sew for others. I like the insides to be pretty.

Very thought provoking. I made some beautiful cushions, aprons etc for a church craft event and they didn't sell very well at all. I had tried to pitch the style, price and finish, but people were more interested in the artisan foods than the crafts. I've not made anything for craft shows since as what's the point?

What an amazingly snotty thing for the vendor to even say - or perhaps the delivery somehow de-fanged it? Or I'm overly sensitive?

I agree with the other commentor: that person flatters herself with the self-entitled "artist" tag.
She sounds like a business person.

Your talent is self-evident.
Earned over a long period of time.
Your art comes out in the risks that you've taken and shown here.

Your artistry might not fit into a cosmetic bag.

This is my first time commenting on you blog which I like by the way. I do a great job on whatever I am sewing because it is a "representation of me" I love things that are well made and if I am looking at something hand made or RTW, I look at the make of the garment, always have and always will. That is why I make it a point to do the very best job I can no matter what.

Interesting question. I have noticed that people who don't sew just aren't as attuned to sewing and fit mistakes as I am. I have a dress that I made several years ago that fits poorly. The bodice is too big, the skirt hem is not straight, and the gathering is uneven. No one who doesn't sew or isn't in my family has *ever* noticed. Instead, everywhere I wear it, I get compliments.

I think that if you're sewing for non-sewers, you can "get away with" a lot more, because they don't know any different. Someone used to buying RTW clothes wont care if the edges are serged inside--that's all they know.

As long as you're not sacrificing actual quality/usability, making things easier on yourself doesn't seem wrong to me.

Gabrielle makes the point that "less well made" didn't affect sales. What else would we expect when the CRAP that is in stores today is often made of low quality fabric put together with microscopic seam allowances, gaps in stitching and lumpy zipper insertions?

American consumers are used to "shoddy" and don't ask for anything better. In stores at least (big box and huge mall-based chain stores) Americans are unwilling to pay the true cost of something.

Quality overall won't improve until shoppers demand it. Shoppers in 2012 America prefer "cheap" to "quality." We live in a disposable economy.