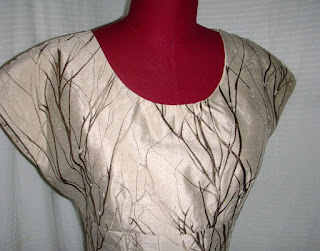 First of all, happy holidays to all - whatever you're celebrating or not celebrating.

It's been rather celebratory around here, and one of the things I'm happiest about is that I finally finished my Solstice dress.  I started it last year with the intention of wearing it to my office's holiday party, got bogged down in a few details and then decided they didn't deserve it anyway.

This year, they still didn't deserve it, but we had made dinner plans for the holiday that required a special dress, and I decided to finally get in there and finish this. 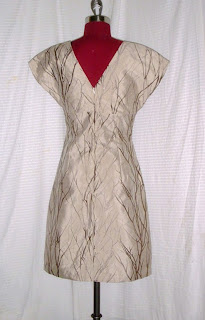 Which basically entailed hemming it.  Why did I think for the last year I had loads to do on this when all I really couldn't decide was how far below or above knee to do it?  When I generally always stick to the same length for this type of dress anyway?

Friday was pretty quiet; I had to work the entire day (to make up for having Christmas Eve off and the glory of a 4 day weekend).  We meant to go to the craft show closing party, but got too comfortable on the couch.  I did a little sewing later, which felt pretty festive to me.

Saturday we ran a few errands, loaded out the leftover craft show items (not as many as expected - this year was a definite improvement over last year) and came home to rest up for dinner.

The last of my aunt's estate is being cleared up, and while she changed things at the literal last moment so that all I ended up with was the contents of her apartment, I was the beneficiary of a very small life insurance policy.

Very small.  Not life-changing; not even month-changing.  So I took a good portion of it and splurged on our favorite French restaurant's Christmas dinner.  A meal that would have sent my aunt into shock for many reasons, and which made me enjoy it all the more.

Five courses, with wine pairings.  We walked in hungry, and rolled out several hours later thinking we might never want to see food - or drink - again.  Of course that wasn't the case, but it was a nice thought for a while.

Here's the menu, just to pass on Christmas thoughts of gluttony: 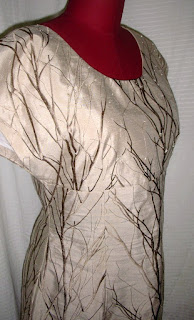 6 oz. filet mignon (was supposed to be venison loin, but the meat delivery failed to appear; wonder if the reindeer had anything to do with that?) with Bordelaise sauce, chanterelle mushrooms, brussel sprouts and potato croquettes.

Remember, each of these courses had a wine pairing.  We were okay until dessert, which was a struggle except that it was so good.  Then they brought espresso, which helped, and finally, with the bill (thank you, Aunt Betty), two house made chocolates.

Which we could not eat.  But they went well with Sunday's breakfast. 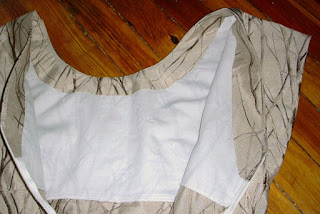 On Sunday evening, further festivation occurred.  Some neighborhood friends were having a performance of Dickens' Christmas Carol at their house - a one man show by a local actor.  We attended that, ate, drank and made merry, and finished the evening by listening to carols on their victrola, including a 1909 version of Silent Night in German.

For Christmas Eve, we visited Mario's family in NJ for a full Feast of Seven Fishes.  By this point, we're beginning to feel a bit like Weebles, but we did ourselves proud anyway.

Tonight is our Christmas, home alone, with yet another glorious meal.  (We don't do gifts for Christmas, since we don't need much and tend to get what we need during the year anyway, but for the last 5 or so years we've hunkered down at home on Christmas day and made ourselves something excessive.)  Tonight's meal is duck legs cooked in Belgian beer with onion, garlic and dried apricots, served over rice.  With wine.  Because we can.

I'm glad I wore the Solstice dress while I could still get it zipped.
Posted by Karen at 5:38 PM

Your dress is exceedingly beautiful and your holiday sounds like perfection. Thank you for sharing so much with us on your blog all year.

I'm glad you finally finished the dress. I remember when you purchased the fabric. It's lovely and the meal sounds scrumptious. I'm glad you had a nice time this weekend. you deserved it.

love the dress,that fabric is perfect for solstice.

Your dress is exquisite, and your feasts sound divine. Since I am Italian, we do the Feast of the 7 Fishes as well, although had a 'lite' version this year! Merry Christmas

It's a beautiful dress and I'm glad you got to wear it! Your holiday festivities sound wonderful especially since they end at home celebrating with your beloved husband!

That is a really beautiful dress. I'm glad you had a nice holiday. Happy New Year!

Woweee that sounds like a terrific gustatory celebration! I love your idea of no gifts and staying home together. Enjoy your 4 day weekend!

It sounds like a wonderful holiday, and it is certainly a beautiful dress! i love the fabric a lot.

Sounds like you have had a great holiday! Cute dress too.

The dress is lovely!

I love the dress -- it is very special. I have to say the perfect coordinating coat was made at another sewing blog I follow: http://couturearts.wordpress.com/2012/12/23/hoping-for-a-christmas-miracle/ The meal sounds spectacular -- and to think you got to toast your Aunt Betty with so many wonderful wines. :) Happy New Year (almost).

Your celebrations sound lovely. As do your meals. The dress - stunning! g

Sounds wonderful! And your dress is lovely. Best wishes for the new year!

Now all those wonderful occasions needed a beautiful dress. And it looks smashing too.
Best wishes to you in 2013.