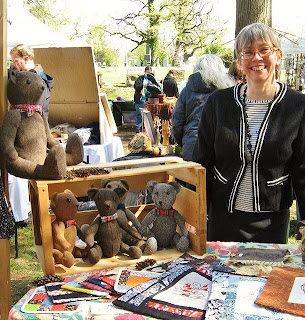 The most popular items by far at the recent craft fair were the tweed teddy bears.

The photo here shows me close to the end of the day, but by 5:00 when we shut down, all I had left were two small ones and the big (display) bear sitting on top.

There's another show coming up in mid-June, and the potential for one in May, the day before Mother's Day, so I decided I needed to get cracking on some more little critters.

Which of course means that next sale, something else will be totally popular and I'll go home with a box of bears, but they'll go eventually - they're cute, not too expensive and very cuddly.  Who could say no, at least for long?

I've got 8 of them in progress right now.  What you see piled up there on the table (yes, sharing the table with Lily the Sewing Room Cat) are 8 bodies, 16 arms and 16 legs.  Somewhere in the room is a bag containing 16 ears, and in a ziploc bag on my desk are 16 black button eyes. 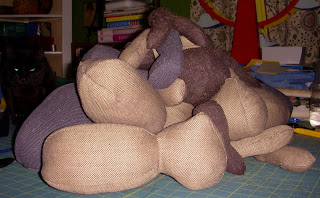 After that photo was taken, I added labels to their bums, and embroidered their noses and mouth.

Hopefully before bed tonight I'll get to add ears and eyes, though at this point, I'm not too hopeful - just realized it's nearly 11:00.  Somehow I lost an hour or two this evening.  I'll make it back tomorrow; no playing in the garden when I should be sewing!