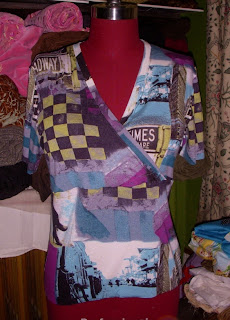 Even though I didn't make it to San Francisco for PR Weekend this year, I thank all the ladies for sending their mojo eastward while they were busy drinking mimosas and buying fabric.

This weekend, I sewed for myself for the first time in ages.  I just haven't felt like it; it's not as though I've put personal sewing aside to work on the crafty sewing.  But Saturday afternoon, with a pile of work on the table, reproaching me, I pushed it aside and went to the fabric shelves.

They've been neat and tidy ever since I got my new shelving unit.  Even when the rest of the room looks like someone's been dumpster diving, the fabric shelves have looked good.  Fact: they still do, there's just one roll missing.  (I have to be neat somewhere, I guess). 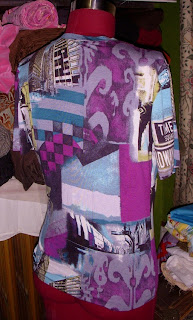 A while back, before I left work, Andrea showed me this free pattern she'd found, the Tessuti top.  I was a little skeptical - it looked a little shapeless.  But some of the examples she showed me were cute, so I downloaded a copy of it which has been sitting on a table in my living room ever since.

Andrea got down to it and made the top almost immediately, and it was way cuter in person.  It doesn't have a lot of shape, but it doesn't make you look shapeless, if that makes sense.  And don't we all occasionally need something cute that drapes but doesn't cling?

Friday night I taped the pattern together, and considered my shelves.  There were a few fabrics that called out to me, but I chose this NY print (purchased at Mood a year or two ago, I believe in the company of Elizabeth).  It originally was going to be a dress, but I decided that the knit was too soft and t-shirty to successfully make it as a dress.  And I hate when I make something out of a fabric that I love and it just doesn't last.  This didn't have dress staying power, so I decided to use it for the Tessuti top.  Since it's only one pattern piece front and back, I could use a large swath of the print  uninterrupted. 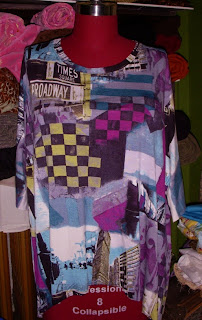 I only changed one feature about the top - I absolutely hate just turning edges under and stitching on knits.  There's too big a chance that it's going to ripple or stretch or do something unspeakable that will make me not wear it, or have to cut around it and end up with a bigger neckline.  So I made a binding, which went on quickly and looks much cleaner to my eyes.

There was a good bit of fabric left over.  Considering the size of those single pattern pieces, I was surprised.   KwikSew t-shirt?  Tank top?  I thought about making a tank to wear under the Tessuti, so there would be no inadvertent flashing, and I had figured out I wanted to combine my leftover print wtih a solid aqua remnant that I had, but when I looked for the fabric, it wasn't there.  (Actually, I can't find any of my knit remnants, not just the ones I recently gifted to Andrea for her super secret project). 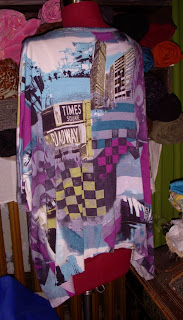 So I decided to go for a top that I've made before, but not for a while - KS 2694.   I wasn't sure if I'd have enough fabric, but I went for it, and somehow I did.  Even enough for sleeves.  Once again, I banded the neckline instead of turning it under.

So there you have it.  One fabric, two completely different looks, and two tops in one weekend from someone who hasn't sewn for herself in about two months.

Now if I could just find three spools of black thread, I could coverstitch these babies and call them finished.
Posted by Karen at 10:52 PM

Two cute tops and a great fabric! Congrats on the mojo!

We missed you at PR weekend! I hope that next year you'll be able to attend.

Hmm, I wouldn't have considered a top in that tunic-y shape because it would seem...widening. But now you have me intrigued...