Getting a jump on Christmas 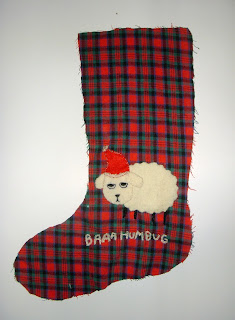 I know, logical, isn't it?  Just as spring finally reaches the East Coast, I'm working on some holiday items.

And it's not like I don't have a show on May 10th, and another one on June 15th, but yesterday it began to bother me that I was getting a bit behind with a particular project, so I put some hours into it yesterday and today.

I made some Christmas stockings last year for a local show, and they did okay.  I made one other stocking, which was a bit more labor intensive - and would never have sold at the local show because I would have had to price it accordingly.  I decided to send it to a friend and fellow blogger, who had hosted me at a workshop at her farm in October.

When she showed it on her blog, it was a total surprise to me.  The reaction it got was also a total surprise, and led me to approach her after the holidays with the idea of running a holiday ad on her blog  next year, featuring - you guessed it - that stocking.  Which, if it's being sold to people who understand, and if I get started in time and can do a little bit of assembly line work, won't be quite so labor intensive. 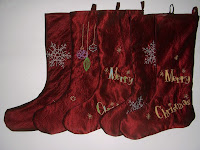 It's those one-off, prototype projects that really slow you down, but sometimes the best work comes out of them.

So right now my sewing table is covered in scraps of plaid flannel, and there are 30 stockings cut out, with linings, waiting to be embellished.  I feel a little better now, especially since I'm starting a project to deal with all those flannel scraps, and those can be made up for sale at the upcoming shows.