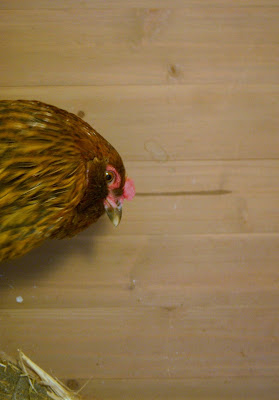 Somehow, once again, I have an only chicken.

And once again, it's Bonnie.  I'm beginning to think it's a plot.

We lost Gilda to the heatwave last June, and it took me until August or so to find Bertha, a non-laying but gorgeous Buff Orpington to share the pen with her.

The night Bertha arrived, she asserted her dominance - and broader breast - by sitting on Bonnie and squashing her.

I'm beginning to wonder how long Bonnie plotted her revenge before she struck on Monday and tore a big chunk out of Bertha's wattle (the dangly bits under and around her beak).  It didn't look bad, but I knew that there was a chance Bonnie would go after her again; chickens have a bit of blood lust and they're certainly not vegetarian.  I cleaned Bertha up and put some ointment on the wound, thinking that it would make her less tasty, if not in less discomfort.

Yesterday things were fine, and I thought Bonnie had gotten over her snit.  Tonight when I got home from work, Bertha was dead in the coop.  The wound looked like it had been pecked again, but for her to die of that wound it should have looked like the set of a Sopranos episode, and it didn't.  Infection from the first wound?  Age?  Short chicken lifespan that was already disrupted by being attacked by a raccoon almost two years ago?

We'll never know.  The one thing I'm pretty sure of at this point is that Bonnie's not getting another roommate.  I don't care if it wasn't her fault; I'm thinking coq au vin right now, and she doesn't need to push me any closer to the cookbook.
Posted by Karen at 10:09 PM

Aw, RIP big Bertha! If you do decide to eat Bonnie will you get more chickens? I'm living vicariously through you right now, as someday I want chickens too! :) I can't believe I just said "eat Bonnie..."

Remind yourself that chickens are related to velociraptors. They can be brutal.

Chickens are very carnivorous...I always used a product called Blu-Cote if a chicken got wounded and they all got coated because they hone in on any differences! Sorry about Bertha...

This is disturbing - I have been learning a lot about chickens from your blog posts....I didn't see this one coming. Maybe you better start with a couple of new chickens that don't have emotional issues.

Maybe it's a good thing the Philly PD is usually busy, so they don't have time to investigate chicken homicides in your yard. Bonnie might otherwise have landed in the slammer by now.