This blog is supposed to be for my personal sewing, not the craft show/business sewing, but since there hasn't been any sewing for me since the recent top-fest, I thought I'd share what's been coming out of the workroom anyway.

These recycled tweed teddy bears were the biggest seller at the craft show in April, which of course means I should have had the remaining ones listed on Etsy ASAP, right?

Except I didn't.  Because there were only a few (so I made 8 more). 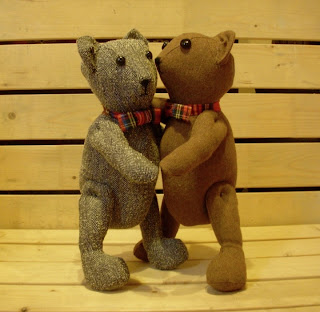 The hell with that.  I was walking back from a friend's house the other day and I saw these great wooden pine slats sitting out in the trash.  There were 6 of them, but I could only carry 4, since it was nearly a mile walk home.

Since it has been raining, these were set up this morning in my downstairs hallway, which gets good light, and I just got down on the floor on my stomach and took the damn pictures.  Uploaded them, tidied them up, got them listed on Etsy.

Why was that so hard? 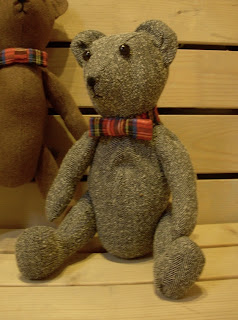 Why do we put off things that need to be done until we can do them absolutely perfectly?  These may not be the photos of my dreams, but you know what?  They exist, and they're up on Etsy, and now people have a chance to actually see them, and if I ever get around to taking better photos (which I will, now that I at least have something, I can always swap them out.

Procrastination is my friend.  I think we need to stop spending so much time together.
Posted by Karen at 1:56 PM

Very nice bears! I hope that you are charging enough for them! Have you figured out how long it takes you to make one?

They are adorable. Procrastination is my friend too (unfortunately).

Lovely bears. I too am thinking of stopping procrastinating. Sooner or later.