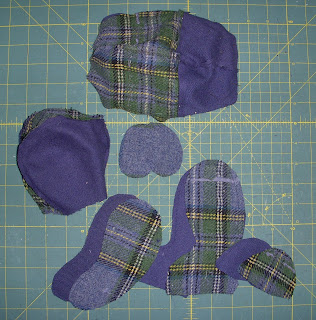 I've been thinking about the Bear Project, and it's gotten slightly larger.

The bear that I want to make from the uniform is my standard 14" bear with movable arms and legs, and button eyes.  I want to use the blazer buttons for the eyes, even though they aren't brass blazer buttons, which would be too cool.  (Would it be wrong to use brass buttons from my stash?  Probably.)

Obviously button eyes aren't a good idea with tiny babies who are likely to gum them off, so I generally offer to embroider simple eyes that can be replaced later with buttons.  What I think I think I'm going to do this time is something a little different.

A first bear, you might say, while the bigger, more elaborate bear sits on a shelf for a while - possibly at grandma's?  I have a pattern for a bear with cut-on legs that I think will work.  There are enough pattern pieces - underside of body, upper side, tail, ears - that I can easily use both fabrics, yet I can embroider basic eyes and mouth and not risk any choking hazards, without sacrificing the best details of the larger bear.

I also think it will give grandma a nice opportunity when her grandchild is older to explain where the bear came from, and that she used to wear those fabrics every day when she went to school.  The child will be able to see the new bear and recognize the same fabrics from the one he/she has had since babyhood.