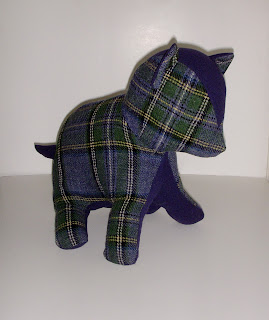 I'm almost finished the keepsake bear (photos to come shortly), but I took a brief detour to try out the pattern for the second bear.

The second bear was supposed to be smaller, but somehow that didn't happen.  I have an old Burda envelope pattern that I wanted to test drive, and the critters came in 2 sizes.  I meant to use the smaller size, and when I realized my mistake, I'd already cut a few crucial pieces in the large size.  Not wanting to waste the fabric, I kept on.

This may be as large as the baby, but it could maybe double as a body pillow?

I haven't embroidered his eyes/nose/mouth yet, but other than that, I think he's done. 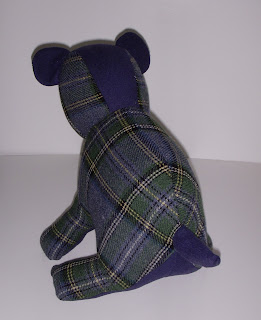 Despite his slightly overwhelming size, he's kind of cute, isn't he?  '

And he certainly doesn't much resemble a school uniform.
Posted by Karen at 7:09 PM