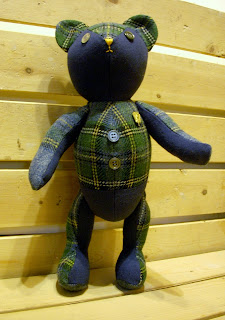 Today the bears were handed off, on their way to their new home.  My friend promises to call me and let me know her sister's reaction when she sees them.

If her sister's reaction is anything similar to hers, there will be totally age-inappropriate squealing involved.

She was surprised when I pulled two bears out of the bag, and I had to explain my "one for now, one for later" approach, mainly because I got too involved in making this little guy here and couldn't resist putting buttons on his vest, and the National Honor Society pin on as well.  Add the button eyes and you've got five choking hazards on one toy.

The second bear, which I just finished today before we met for coffee, is much simpler, and I just did black embroidered "X" eyes and a mouth and left it at that. 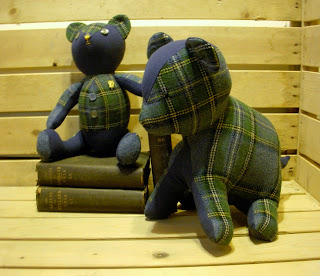 It's going to be more of a pillow than a bear for a while, and then it will be sufficient for the size of the baby.  Once he/she gets older (and I'm hoping it's a boy, since this seems like a boy bear to me, even though it came from a girl's school uniform), it'll be much more interesting to have the detailed bear and have grandma explain where the fabrics came from.

At least that's my thinking, and my friend was in total agreement.

Photos were taken with my usual crate backdrop, but these bears don't quite fit the "rustic" theme so I gave them a few antique books to hang out with - an educated bear should be able to appreciate them. 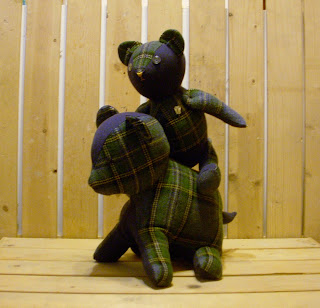 And yes, I know this last photo is totally wrong, but I didn't realize just how much bigger the "baby" bear was.

I'm sorry, I couldn't help it.  See what strange things you come up to when you're organizing a photo shoot with two stuffed animals, three pieces of unattached crate and at least six helpful felines (all of whom photobombed at one point or another, which made the shoot take even longer).

Craft Market on Saturday - fingers crossed that the rains will be over by then.  Good for the garden but not for crafters.
Posted by Karen at 8:03 PM